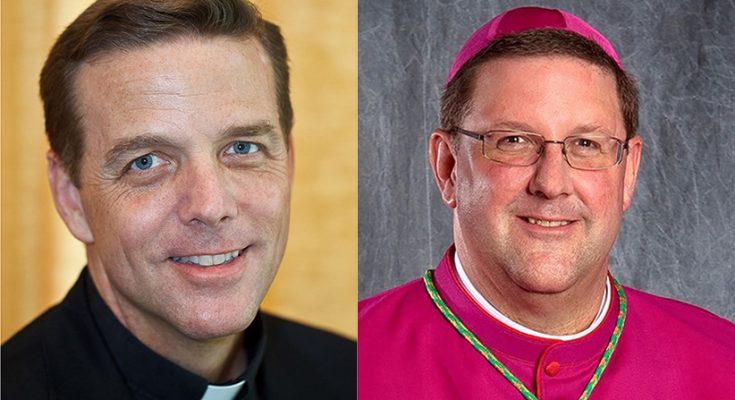 When Bishop-elect Stephen Parkes becomes the 15th bishop of the Diocese of Savannah, Georgia, on Sept. 23, he will become a brother bishop to his sibling, Bishop Gregory L. Parkes of the Diocese of St. Petersburg, Florida. They will be one of only 11 pairs of sibling-bishops in the history of the Church in the United States. For the Parkes brothers, it is especially poignant, as they are the only two surviving members of their immediate family.

The 55-year old Bishop-elect Stephen Parkes has served the Diocese of Orlando, Florida, for 22 years, the last nine as pastor of Annunciation Parish in Altamonte Springs. The announcement of his appointment as bishop was made July 8 in Washington, D.C., by Archbishop Christophe Pierre, the Vatican nuncio to the United States. The bishop-elect had only learned of it himself on July 2. He was making breakfast following his weekly 31-mile morning bike ride when the apostolic nuncio called to tell him that Pope Francis had selected him as a bishop.

“I was very surprised, but humbled by the confidence the Holy Father Pope Francis is placing in me,” Bishop-elect Parkes told Our Sunday Visitor. “We go where we are asked to serve, trusting that it is God calling us,” he said. As he prepares for his new role, Bishop-elect Parkes will look to his older (by 14 months) and taller (6-feet, 8-inches to his 6-feet, 4-inches) and more experienced brother, who has been a bishop for eight years.

“We are very blessed to have been sibling brothers, brother priests and now brother bishops,” he said. Bishop Gregory Parkes was ordained as a priest in the Orlando diocese in 1999, was installed as bishop of the Diocese of Pensacola-Tallahassee, Florida, in 2012 and has been serving as bishop of St. Petersburg since Jan. 4, 2017. 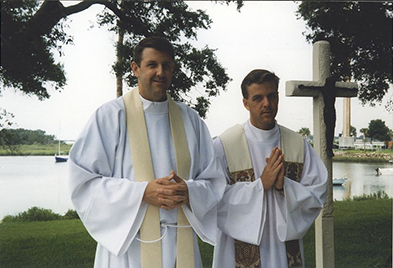 The two brothers share another unique bond having both been appointed as founding pastors within a month of each other when two new parishes opened in the Orlando diocese in 2005, the Year of the Eucharist. Father Stephen was assigned to The Most Precious Blood in Oviedo, Florida, and Father Gregory to Corpus Christi in Celebration, Florida.

“We really leaned on one another during that time,” Bishop-elect Parkes recalled. “There was nothing to look to; no handbook to follow. The first thing I did was get a P.O. box and a tax ID number and then we started our Masses.” Although he wondered if anyone would even show up for the first Sunday Mass at the new church, 1,000 people did. When he left there in 2011, there were 2,000 families and 900 children as parishioners.

Bishop-elect Parkes was born in Mineola, New York, on June 2, 1965, the youngest of Joan and Ron Parkes’ three boys. His brother, Gregory, was 14 months old at the time and the oldest, Christopher, was 4. Christopher died in 2017. He had worked in Maryland for the Department of the Navy for 30 years and had one daughter, Courtney, who will be present at her uncle’s episcopal installation. She was married by her two uncles — bishop and priest — with the priest doing the homily and bishop as the main Celebrant. 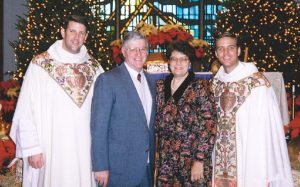 Bishop Parkes explained to Our Sunday Visitor that their mother died in 2000 and their father passed away in 2002. Their parents had moved from New York to Ormond Beach, Florida, in 1984, and he and his younger brother followed. “My parents always provided us with a great example of what it means to serve God and serve the Church,” he said. “They were very involved in the Church — the parish was a big part of our life.”

Their father worked in banking for several years then got into information technology. Their mother was an English teacher who got a master’s degree in faith formation and became a director of parish faith formation. The boys played baseball, track and flag football with the Christian Youth Organization (CYO) and high school basketball and golf.

“We fought and teased, but in the end, we always loved each other,” Bishop Parkes said.

The two brothers graduated from college with business degrees and worked in finance for several years before responding to a call that continued to linger — to the priesthood. It was Stephen, the youngest, who responded first, entering the seminary in the fall of 1992 at age 27 and ordained to the priesthood in 1998. Bishop Parkes entered the seminary in the fall of 1993 at 29 and was ordained in 1999,

After Bishop-elect Parkes received the news of his appointment, his brother was the next one to know. “The nuncio called me right after he had called my brother,” Bishop Parkes explained. “‘I have some news for you about your brother,’ he said and then told me about it. As soon as I finished the call, I called my brother and let him know how happy and proud I was of him.”

Following the big news, the brothers met for lunch, and the bishop gave his bishop-elect brother a Celtic pectoral cross he had received from Bishop John Noonan of the Diocese of Orlando when he was named a bishop in 2012. The bishop-elect wore it during his July 8 press conference held in the Diocese of Savannah.

Although the announcement that their pastor would be a bishop brought joy among the parishioners and staff at Bishop-elect Parkes’ Annunciation Church, it also brought sadness. Nanci O’Reilly, office manager and assistant to the pastor, has known Bishop-elect Parkes for 25 years and worked with him for 17 of those. He spent his pastoral year during seminary at Annunciation, then the first seven years of his priesthood before serving at The Most Precious Blood Church, then he returned in 2009 to replace a retiring pastor.

“He’s an all-around great guy and makes everyone feel so special,” O’Reilly said. “We were all so shocked, and the tears came when we heard the news. Everyone loves him.” O’Reilly explained that the bishop-elect never wanted to turn anyone down, so his calendar was usually overflowing with appointments. “I would tell him to use my initials sometimes — ‘N.O.’ — but he can’t use my initials with God,” she said. “The people of Savannah are so lucky to have him.”

Bishop-elect Parkes agrees that saying goodbye will be hard. “They’ve been my family,” he said. But he is also looking forward to getting to know the priests and faithful of Savannah. With 37,000 square miles and a population of 2,934,000 (of which 75,603 are Catholic), the bishop-elect said he plans on doing a lot of driving.

“It is a new place to live and many new people to get to know, but one thing is always the same,” he said, “and that is Jesus Christ. Our faith in Christ brings us through whatever we face and whatever he asks of us.”