Home Ghana News Seven Deacons for the Catholic Church in Accra; A sign of new creation? 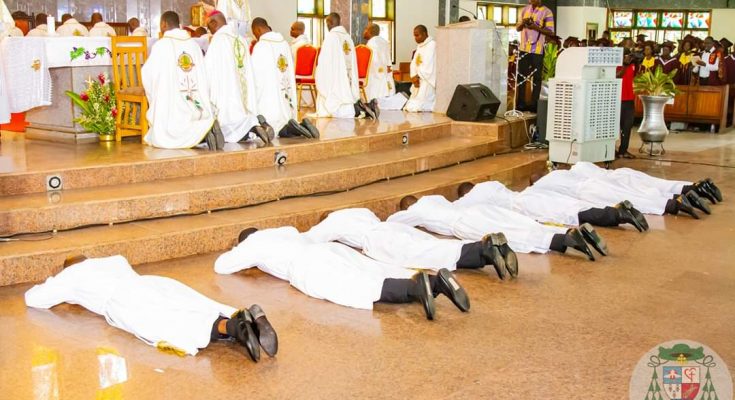 Seven Deacons for the Catholic Church in Accra; A sign of new creation?

On January 10, 2020, the Catholic Archbishop of Accra, Most Rev Bonaventure Kwofie for the first time ordained seven deacons for the Catholic Church of Accra. In fact, the number seven is very symbolic in the Holy Scriptures and in theological discourse.

For us in the time of Christ, the first day of the week, the day on which Christ rose from the dead as a sign of new creation, and new light, that is, Sunday, we observe the Sabbath. It became a holy day, a day of rest, a day of putting all offenses behind, a day of forgiveness, a day of cancelling all debts, a day of reconciliation, a day of recreation to mention but few.

It is a number of completeness. It is the fusion of the physical and the spiritual or earth and heaven or human and divine. In fact, in Jesus who is both human and divine we find perfection, that is symbolized by the number seven(7).

The number seven becomes more meaningful because the deacons of the Catholic Archdiocese of Accra chose the text of Acts of the Apostles 6:1-6 for the second reading during the liturgy of the Word. In this text seven(7) men of good repute were chosen including Stephen, the first martyr who died for the Christian faith.

This ordination of seven(7)deacons for the Catholic Archdiocese of Accra should mean a lot for the local ordinary Most Rev. Bonaventure Kwofie to continue the works of his predecessors: Rt. Rev. Adolf Noser, Most Rev. Joseph Oliver Bowers, Most Rev. Dominic Kwadwo Andoh, and Most Rev. Charles Gabriel Palmer-Buckle.