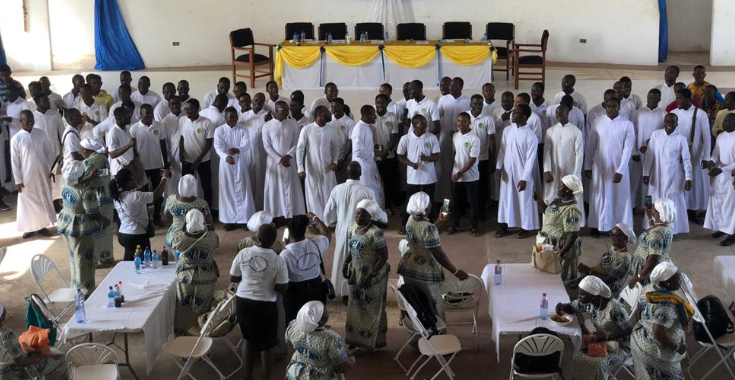 The Metropolitan Archbishop of Accra, Most Rev John Bonaventure Kwofie has urged all seminarians especially those in the Archdiocese of Accra to consider taking active role in forming and educating the youth of the various parishes in the Archdiocese especially during their formative years.

The Prelate said this will help keep the youth in the Catholic faith as well as resolve some of the confusions and challenges young men and women today face.

He opined that since seminarians are also youth, they are better placed to understand and appreciate the challenges and joys of today’s youth and as such journey with them to arrive at amicable solutions that will strengthen their faith in God and Holy Mother Church.

The Archbishop made this call in a homily during a Eucharistic celebration to mark this year’s breakfast meeting of Seminarians in the Archdiocese of Accra.

The event which is an annual program on the union’s calendar came off at the St Paul’s Catholic Church in Kpehe.

The Vicar General in his address also called on seminarians to pursue the youth apostolate with all the zeal they can gather. He encouraged seminarians to also be creative and proactive.

He challenged seminarians to come up with new ideas to help improve the way in which the church currently goes about things warning about what he termed “Acquired Routine Deficiency Syndrome.” He concluded by encouraging the seminarians to hold on firm to their call because it is Christ himself who calls. Whenever they have doubts they should talk to the Lord.

The Archbishop spent time acknowledging and praising the kind gesture from the Christian Mothers Association of the Archdiocese and prayed for God’s continuous blessings on them for sponsoring  the annual event.

The program was concluded with an interaction session between seminarians and the Christian Mothers present. It afforded the mothers the opportunity to ask pertinent questions about formation in general and also share some pieces of advice with their sons even as they continue their formation.

There were goodwill messages from the Christian Mothers as well as the Vocations Director. The seminarians from Sowutuom and Pedu did some presentations on Mission and Christus Vivit respectively.