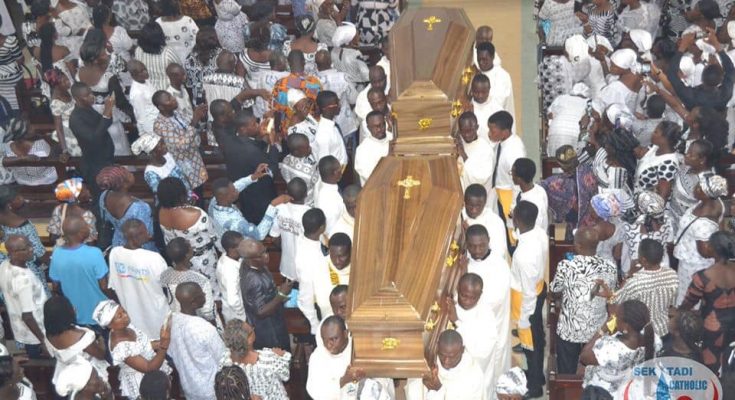 The funeral Mass for Msgr. Francis Abuah-Quansah and Fr. Paul Awuah has been held at the Star of the Sea Cathedral, Takoradi. The Mass held on Thursday, February 13, 2020 was presided over by His Eminence, Peter Cardinal Appiah Turkson, President of the Dicastery for Promoting Integral Human Development.

Addressing the congregation, Cardinal Turkson called on all to pray for the peaceful repose of the souls of Msgr. Abuah-Quansah and Fr. Awuah asking God to be “gracious, merciful and compassionate to them” He also prayed for God’s consolation for “the families, friends and loved ones of the two beloved priests.”

Most Rev. Charles Gabriel Palmer-Buckle, Metropolitan Archbishop of Cape-Coast who gave the homily encouraged all present to believe in the truth of the resurrection. He said, “Our tears, pain and sadness should not be like that of those who do not belief in the resurrection and eternal life. Jesus says ‘I am the Resurrection and the life.” He added that believing in truth of these words of Jesus “is the key to opening the graces of God in Christ Jesus won for us by His sacrificial death on the cross.”

He further called on all present to hold strong to their faith especially in tough times. “It is easy to profess faith and yet not believe fully. There are moments in our lives when we are confronted with believing what we profess with our lips. Jesus tells us that if we believe we are going to see the glory of God. Very often when someone dies, it is you and I see who are alive who are being called to marshal our faith in order to see the glory of God.”

Archbishop Palmer-Buckle who also happens to be a classmate of Msgr. Francis Abuah-Quansah asked the congregation to “ask the Lord to increase our faith in the resurrection and pray that they may be rewarded for the many years of priestly services they rendered when they were with us in human flesh.”

Very Rev. Fr. Paul Awuah was born June 10, 1959 and ordained a priest on July 18, 1992. He was Parochial Vicar of St. Paul’s Pro-Cathedral, Sekondi from 1992 to 1998. He also served as Pastor of Parishes in Kwesimintsim, Axim and Asankragwa. Until his passing away on January 3, 2020, he was the Dean of the Asankragwa Deanery and member of the Presbyteral Council of the Catholic Diocese of Sekondi-Takoradi.

The Mass was concelebrated by over 300 priests with thousands of lay faithful in attendance. 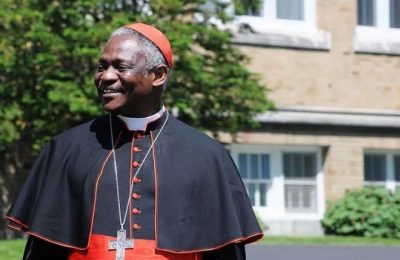 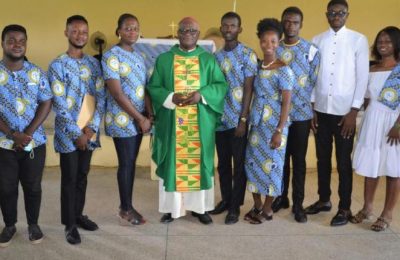 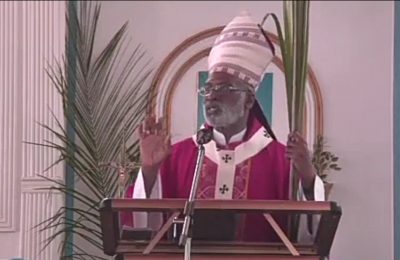