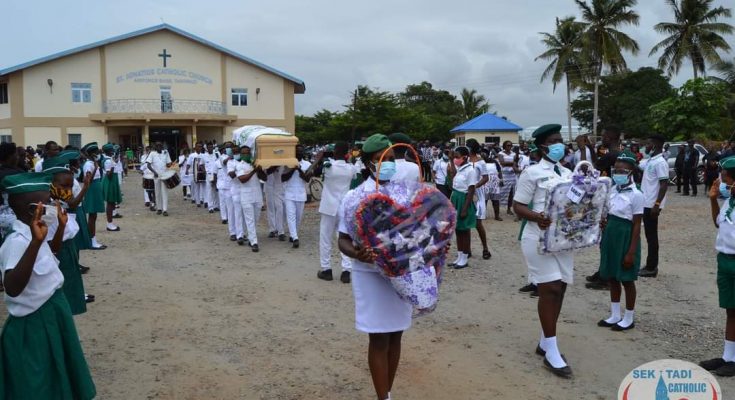 The Diocesan Youth Council of the Catholic Diocese of Sekondi-Takoradi has created a new foundation in memory of Evans Okai Yeboah who passed away on August 15, 2020 at the age of 16.

The creation of the Evans Okai Yeboah Foundation was announced during a requiem Mass for Evans held on Friday, August 28, 2020. The Requiem Mass was held at the St. Ignatius Parish, Air force Base, Takoradi where Evans was a parishioner.

The Diocesan Youth Chaplain, Rev. Fr. Francis Baffoe Davis who made the announcement, stated that “in consultation with the family, the funds raised through the Diocesan Youth Council to support the family in accessing health care for him has been used as seed money for the foundation to support youth activities in the diocese.”

Addressing friends and sympathizers who had attended the Requiem Mass, Msgr. James Mesu who presided over the celebration expressed gratitude to the family and to all “who have supported Evans throughout his health crisis when he was alive.”

He further added that “being poor in spirit has no correlation with being poor physically, but rather, when one is poor in spirit, he or she sacrifices for the work of God and is mindful of the fact that, one day, life will come to an end and with it, judgement.”

Evans Okai Yeboah was born on March 30, 2004. He attended Bishop Essuah Memorial School for his basic education and continued to St. Mary’s Boys Senior High School. He had the dream of becoming a lawyer in future.

He was first diagnosed with type 1 kidney disease at age three which was managed until the need for dialysis arose in his latter years. The Diocesan Youth Council together with societies he belonged to initiated fund raisers to support the family in paying for the sessions. He died on Saturday, August 15, 2020 at the Korle-Bu Teaching Hospital where he was on admission.

The Mass presided over by Msgr. Mesu was concelebrated by six priests. Also in attendance were a religious sister, seminarians, members of the CYO, lay faithful, members of Supreme Masqueraders Society, staff and students of St. Mary’s Boys Senior High School, family, friends and sympathizers.

Share this
Previous PostVatican confirms World Mission Day 2020 will be observed on Oct. 18 Next PostSaint of the day: St. Augustine, Bishop, Doctor of the Church