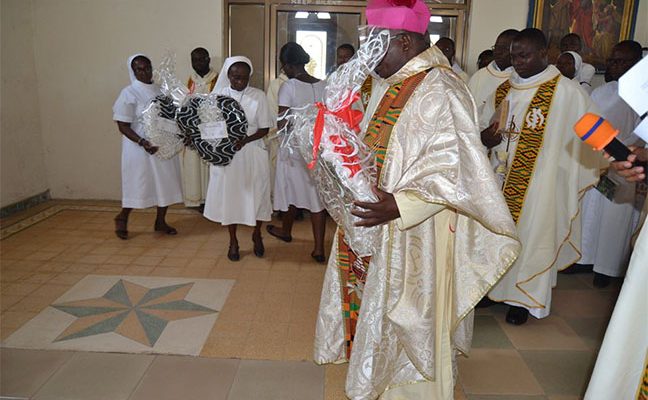 As part of activities to earmark the golden jubilee celebration of the Catholic  Diocese of  Sekondi-Takoradi , a memorial mass has been held in honour of deceased clergy and religious at the Star of the Sea Cathedral for their sacrifices and commitment to the cause of the Diocese for the love of God.

The memorial mass held on Wednesday November 5, 2019, brought together clergy, religious as well as family members of the deceased Priests and Religious and some selected students from Catholic Schools in the Diocese to eulogise the deceased for their imminent role in sustaining the catholic faith in the diocese.

Rev. Msgr. Francis Abuah- Quansah, a delegate of the Apostolic Administrator Delegate and the Chairperson for the Golden Jubilee Planning Committee in homily counseled the Clergy and the Faithful present to direct their energies into the jubilee celebration to materialize their call to become witnesses to the truth of faith
“Today we celebrate our brothers and sisters who in death have experienced the Lord and are rejoicing in his victory over death…and thus gives us a foretaste of his victory over death and the chaos out there”, he added.

The Clergy and Religious present then moved to the tombs of the three deceased Bishops and laid a wreath before moving to the Priests cemetery at Apowa where they recited the litany of the Saints and prayed the Office of the Dead and also laid a wreath.

The Diocese is also expected to host a Papal Awards ceremony on 30th November, 2019 at the Star of the Sea in Takoradi as part of the golden jubilee celebration.