Home Ghana News Saint of the day: The Seven Martyrs 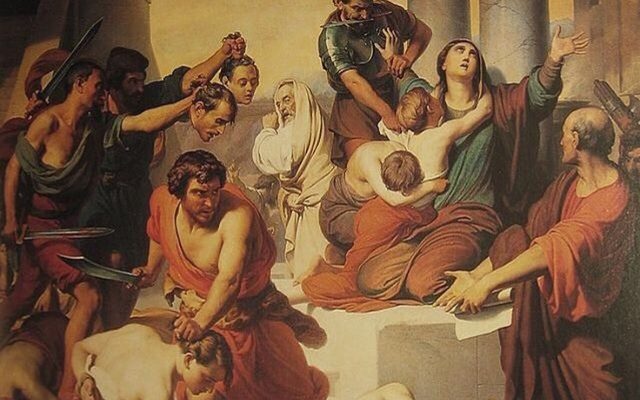 Saint of the day: The Seven Martyrs

St. Felicity was a noble Roman lady, distinguished for her virtue. This mother of seven children raised her sons in the fear of the Lord. After the death of her husband, served God in continence, concerning herself only with good works. Her good examples and those of her children brought a number of pagans to renounce their superstitions, and also encouraged the Christians to show themselves worthy of their vocation.

The pagan priests, furious at seeing their gods abandoned, denounced her. She appeared with her pious sons before the prefect of Rome, who asked her to sacrifice to idols, but in reply heard a generous confession of faith. Wretched woman, he said to her, how can you be so barbarous as to expose your children to torments and death? Have pity on these tender creatures, who are in the flower of their age and can aspire to the highest positions in the Empire! Felicity replied, My children will live eternally with Jesus Christ, if they are faithful. They will have only eternal torments to await, if they sacrifice to idols. Then, turning to her children, she said, “look towards heaven, where Jesus Christ is waiting for you with His Saints! Be faithful in His love, and fight courageously for your souls” .

The Judge, taking the children one by one, tried to convince them to renounce their faith. He began with Januarius, but received this answer. “What you advise me to do is contrary to reason, Jesus, the Saviour, will preserve me. Felix, the second, was then brought in. When they urged him to sacrifice, he answered. There is only one God, and it is to Him that we must offer the sacrifice of our hearts. Use all artifices, every refinement of cruelty, you will not make us betray our faith! The other brothers, when questioned, answered with the same firmness. Martial, the youngest, who spoke last, said, all those who do not confess that Jesus Christ is the true God, will be cast into a fire which will never be extinguished.

When the interrogation was finished, the brothers were lashed and then were taken to prison. Januarius was beaten until he died by leather straps capped with lead. Felix and Philip were killed with bludgeon. Sylvanus was thrown headfirst from a cliff. Alexander, Vitalis and Martial were beheaded. Felicity, the mother of these new saints, was the last to suffer martyrdom.

How would you feel to see your child killed, let alone all seven of them? It is by the grace of God. Remember our Mother Mary? It was not easy but knowing that their souls were going for the greatest reward assured her. As long as we know explicitly that this is RIGHT, may we be steadfast and firm especially if it has everything to do with our faith. Amen

Share this
Previous PostIGP and CDS praise Catholics working in their institutions Next PostOne case of covid-19 untraced is many enough, Archbishop Kwofie cautions students