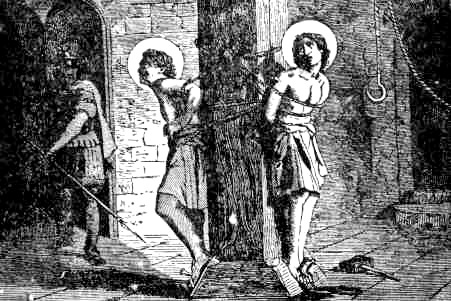 Saint of the day: Sts. Mark and Marcellian, Martyrs

Mark and Marcellian were born twin brothers from a distinguished family. They lived in Rome and became deacons in the early Church.

When they refused to sacrifice to the Roman gods, they got arrested. Their parents, Tranquillinus and Martia, who were not Christians then, visited them in prison and urged them to renounce their Christian faith.

However, Saint Sebastian the martyr convinced them not to abandon their faith. St Sebastian converted Tranquillinus and Martia, as well as Tiburtius, the son of Chromatius, the local prefect. Nicostratus, another official, and his wife Zoe, were also converted.

The story states that Zoe had been a mute for six years but one day, she told St Sebastian her desire to convert to the Faith. As soon as she had, her speech returned to her. Nicostratus then brought the rest of the sixteen prisoners, who were also converted by St Sebastian.

When Chromatius and Tiburtius became converts, Chromatius set free all his prisoners, resigned his position, and retired to Campania. Mark and Marcellian were concealed by Castulus, a Christian officer, but they were betrayed by an apostate, Torquatus.

The twins were again taken into custody. Chromatius’s successor, Fabian, condemned them to be bound to two pillars with their feet nailed to them. Mark and Marcellian hung there for a full day until they were pierced with lances. The twins were buried in the Via Ardeatina, near the cemetery of Domitilla.

Meanwhile, Zoe was hung to the branch of a tree and a fire was kindled underneath her feet, and she died this way. Nicostratus and five others were drowned in the Tiber River. Tiburtius was thrown into a ditch and buried alive.

One would think it was a horrible way to die but for them, it was a joy to suffer for Christ and today, their blood and heroic faith assures us of a better and greater reward. Amen

Sts. Mark and Marcellian, pray for us. Happy feast day to all Mark, Marcellian and all twins.

One thought on “Saint of the day: Sts. Mark and Marcellian, Martyrs”