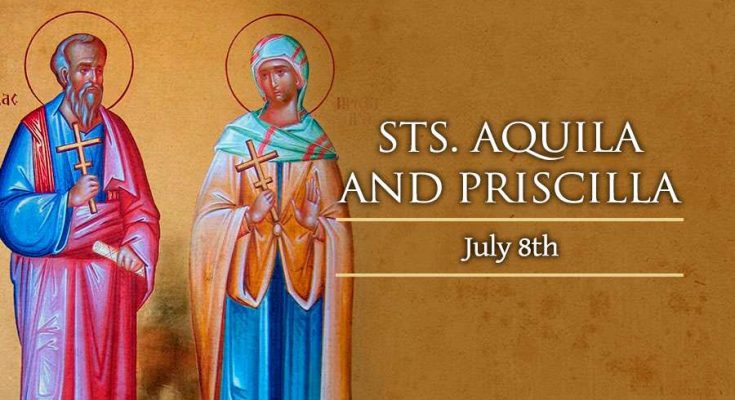 Saint of the day: Sts. Aquila and Priscilla

Saints Aquila and Priscilla were a Jewish couple from Rome who had been exiled to Corinth, and were friends of St. Paul in the first century. They hosted St. Paul on his visit to that city and were probably converted by him. They are mentioned a few times in the New Testament in glowing terms by their friend Paul, who calls them “my helpers in Christ, who have for my life laid down their own necks” (Romans 16:3-4).

They were tentmakers, thus sharing the same profession as Paul, and because of this it is thought that Paul may have worked with them. Acts 18:18-19 tells us that they accompanied Paul to Ephesus and stayed there with him for three years.

In the era of house churches – when Mass was always celebrated in the house of one of the Christian community – their house was an important one.

According to tradition they were martyred in Rome on their return, probably around the same time as St. Paul.

Share this
TAGSaint of the day Sts. Aquila and Priscilla
Previous PostSIGNIS Africa to host webinar for 70th anniversary of Radio Vatican broadcasts in Africa Next PostNPP, others disregard for COVID-19 health protocols worrying, Catholic Bishops