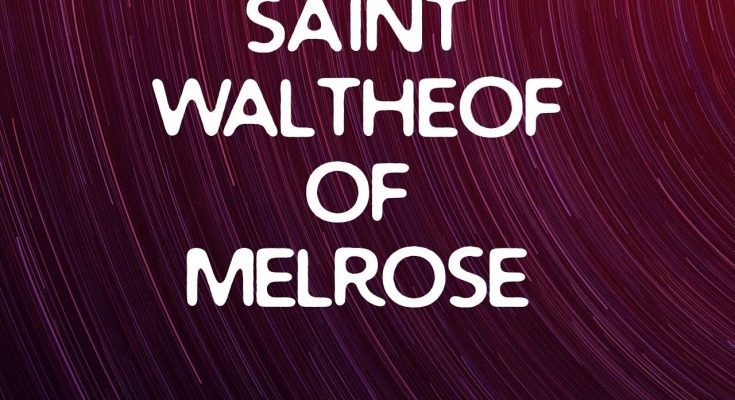 Saint of the day: St. Waltheof of Melrose, Abbot

Waltheof was born in the year 1095. He was the son of King Simon I of St Liz, 1st Earl of Northampton and mother, Maud also called Matilda, 2nd Countess of Huntingdon. As a younger son in the world of Norman succession laws, Waltheof chose a career in the church. Between the year 1128 to 1131, he entered Nostell Priory to become an Augustinian canon. His noble connections enabled him to rise quickly and within a few years became Prior of Kirkham, North Yorkshire.

Upon the death of Thurstan, Archbishop of York, in 1140, Waltheof was nominated to be his successor. His candidacy was supported by William of Aumale, the Earl of York. But King Stephen sensing his links to King David and hence to the Empress Matilda were too strong, rejected the nomination. William of Aumale withdrew his support after Waltheof refused to promise to give the earl the ecclesiastical manor of Sherburn-in-Elmet in the West Riding of Yorkshire. William fitz Herbert was instead chosen by Stephen.

Waltheof featured prominently among those opposing William’s decision, but by the year 1143, he had given up and become a Cistercian monk at Rievaulx Abbey. In 1148, he was elected to the abbacy of Melrose, a sister house of Rievaulx. Waltheof remained in this position for the rest of his life, even though he was offered the bishopric of St Andrews in early 1159, which he declined. He died at Melrose Abbey on 3 August, 1159.

Following the death of Waltheof, his successor as Abbot of Melrose, Abbot William, refused to encourage the rumours that was spreading regarding Waltheof’s saintliness. Abbot William attempted to silence these rumours, and prevent the intrusiveness of would-be pilgrims. However, he was unable to get the better of Waltheof’s emerging cult, and now his actions were alienating him from his brethren. As a result, in April 1170, William resigned from his position.

In his place was appointed Jocelin, as prior of Melrose. Jocelin had no such scruples. He embraced the cult without hesitation. In the same year of his accession, it was reported in the Chronicle of Melrose that: “The tomb of our pious father, Abbot Waltheof, the second abbot of Melrose, was opened by Enguerrand, bishop of Glasgow and four Abbots called in for this purpose. His body was found entire, and his vestments intact, twelve years after his death on 22 May. And after the holy celebration of mass, the same bishop and the abbot’s, placed over the remains of Waltheof’s most holy body a new stone of polished marble. And there was great gladness. Those who were present exclaiming together, and saying that truly this was a man of God …

May our lives encourage and warrant our calling for sainthood. Even if a prominent person is against you, the whole world will be for you.

Share this
Previous PostSaint of the day: St. John Mary Vianney, Patron of Parish Priests Next PostPope at Angelus: Eucharist provides strength to care for others