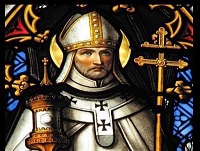 Saint of the day: St. Walter of Pontoise

Walter Gautier was born in Picardy, France, in the eleventh century. A well educated individual, he became a professor of philosophy and rhetoric. Later, he entered the Benedictine abbey of Rebais-en-Brie.

When King Philip I appointed Walter as the first Abbot of the new monastery at Pantoise, Walter reminded Philip that God was the one who conferred such honours and not the King. Seeking solitude, he fled Pantoise on two occasions, but both times he was forced to return.

Walter then went to Rome to ask Pope Gregory VII for release from his position so that he could follow a life of solitude. However, the Pope told Walter to use his talents God had given him and thus Walter resigned himself to staying at Pantoise. When he spoke out against simony, and the evil lives of the secular clergy, this caused great outrage, and on one occasion, he was beaten and thrown into prison.

After his release,Walter continued to live a life of mortification, spending entire nights in prayer. After establishing the foundation of a convent in honour of Mary at Bertaucourt, Walter died on Good Friday in the year 1095.

Sometimes, our own, who should protect and support us are the same people who abuse and accuse us. Knowing that we are doing what is right, may we never tolerate wrongdoing especially if it will hurt our Saviour. What a happy death.

St Walter, pray for us. Amen

Happy feast day to all Walter.

Share this
Previous PostThe Antivirus Called Hope. Easter Message from the President of SIGNIS Next PostSouth African Bishop calls for support for underprivileged amidst global crisis