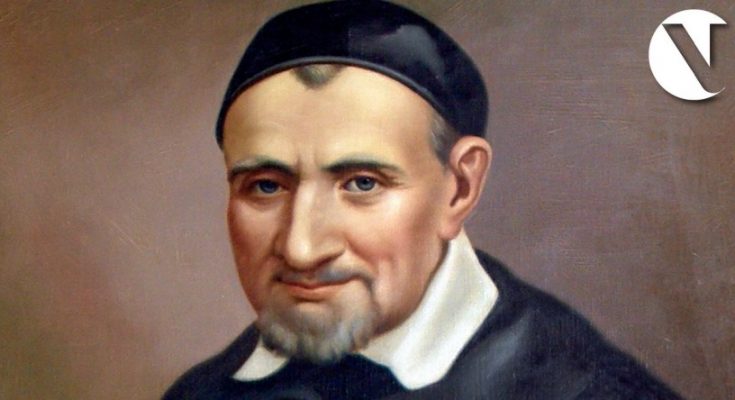 Like
Post Views: 923
On Sept. 27, the Catholic Church remembers Saint Vincent de Paul, the French, 17th century priest known as the patron of Catholic charities for his apostolic work among the poor and marginalized.

During a September 2010 Angelus address, Pope Benedict XVI noted that St. Vincent “keenly perceived the strong contrast between the richest and the poorest of people,” and was “encouraged by the love of Christ” to “organize permanent forms of service” to provide for those in need.

The exact year of Vincent’s birth is not definitively known, but it has been placed between 1576 and 1581. Born to a poor family in the southwest of France, he showed his intellectual gifts from a young age, studying theology from around age 15. He received ordination as a priest in the year 1600, and worked as a tutor to students in Toulouse.

During a sea voyage in 1605, Vincent was seized by Turkish pirates and sold into slavery. His ordeal of captivity lasted until 1607, during which time the priest converted his owner to the Christian faith and escaped with him from Tunisia. Afterward, he spent time studying in Rome, and – in a striking reversal of fortune – served as an educator and spiritual guide to members of an upper-class French family.

Although Vincent had initially begun his priesthood with the intention of securing a life of leisure for himself, he underwent a change of heart after hearing the confession of a dying peasant. Moved with compassion for the poor, he began undertaking missions and founding institutions to help them both materially and spiritually. The one-time slave also ministered to convicts forced to serve in squalid conditions as rowers aboard galley ships.

Vincent established the Congregation of Priests of the Mission in 1625, as part of an effort to evangelize rural populations and foster vocations to remedy a priest shortage.
Not long after this, he worked with the future Saint Louise de Marillac to organize the Daughters of Charity, the first congregation of women religious whose consecrated life involved an extensive apostolate among the poor, the sick, and prisoners.
Under Louise’s direction, the order collected donations that Vincent distributed widely among the needy. These contributions went toward homes for abandoned children, a hospice for the elderly, and an immense complex where 40,000 poor people were given lodging and work. Vincent was involved in St. Vincent de Paularious ways with all of these works, as well as with efforts to help refugees and to free those sold into slavery in foreign lands.

Though admired for these accomplishments during his lifetime, the priest maintained great personal humility, using his reputation and connections to help the poor and strengthen the Church. Doctrinally, Vincent was a strong opponent of Jansenism, a theological heresy that denied the universality of God’s love and discouraged reception of the Eucharist. He was also involved in the reform of several religious orders within France.