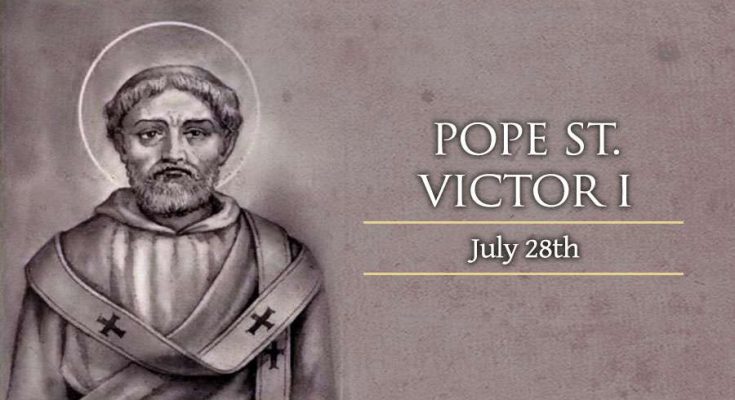 Saint of the day: St. Victor I, Pope & Martyr

St. Pope Victor I was the first Bishop of Rome born in the Roman Province of Africa. He was of African descend. Pope Victor’s episcopate was during the last decade of the second century. St Eusebius puts his accession in the tenth year of Commodus i.e. A.D. 189. St Jerome’s version of the Chronicle puts his accession in the reign of Pertinax, or the first year of Septimius Severus.

An anonymous writer quoted by St Eusebius said Victor excommunicated
Theodotus of Byzantium for teaching that Christ was a mere man. However, he is best known for his role in the Quartodeciman controversy. Prior to his elevation, a difference in dating the celebration of the Christian Passover or Easter between Rome and the bishops of Asia Minor had been tolerated by both the Roman and Eastern churches.

The churches in Asia Minor celebrated Easter on the 14th of the Jewish month of Nisan, the day before Jewish Passover, regardless of what day of the week it fell on, as the Crucifixion had occurred on the Friday before Passover, justifying this as the custom they had learned from the apostles. For this, the Latin Rite called them Quartodecimans. Synods were held on the subject in various parts in Judea under Theophilus of Caesarea and Narcissus of Jerusalem, in Pontus under Palmas, in Gaul under Irenaeus, in Corinth under its bishop, Bachillus, at Osrhoene in Mesopotamia, and elsewhere. All of which disapproved of this practice and consequently issued by synodical letters declaring that “on the Lord’s Day only the mystery of the resurrection of the Lord from the dead was accomplished, and that on that day only we keep the close of the paschal fast” (Eusebius H. E. v. 23). Despite this disapproval, the general feeling was that this divergent tradition was not sufficient grounds for excommunication. The excommunication sanction was later withdrawn since the Asian Churches remained in communion with Rome for many centuries.

Victor alone was intolerant of this difference, and severed ties with these ancient churches, whose bishops included such luminaries as Polycrates of Ephesus. It was under his reign that Latin replaced Greek as the official language of the Church. He died in the year 199 AD in Rome.

Happy feast day to all Victor. St Pope Victor, pray for us. Amen