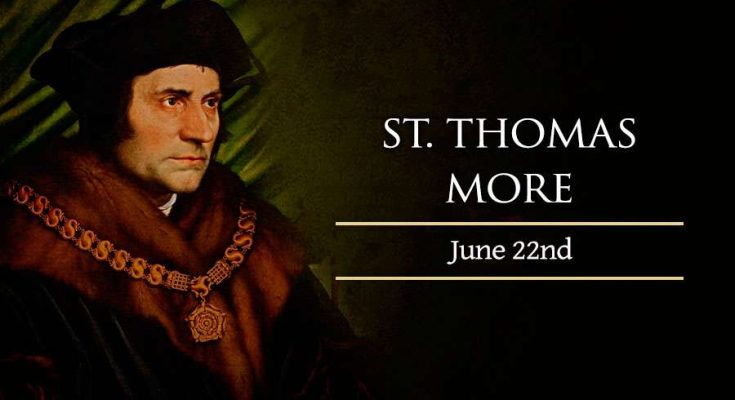 Saint of the day: St. Thomas More,Patron of Lawyers

Thomas attended school in London. He served as a page for the Archbishop of Canterbury. He later studied law.

Thomas got married and had a very happy family life sharing their means with the poor. Soon after, his wife died and for the sake of his children, married again.

King Henry VIII made him Chancellor of England, a position second only to that of the King himself. Thomas enforced the laws of England and made sure that the poor were protected against injustice.

There was a time when Thomas was hearing Holy Mass, King Henry sent for him. Thomas did not leave until Mass ended but sent this message to the King, “as soon as my audience with the King of Heaven is ended, I will at once obey the desire of my earthly king”.

King Henry wanted a law passed making himself head of the church of England because the Pope would not grant him a divorce from his Queen. When Thomas refused to consider such a law and resigned his position, he got arrested. At the trial, false witnesses were called against him, and he was condemned to death. He prayed for the king before he was beheaded.

Feast of The Immaculate Heart of Mary

Share this
TAGSaint of the day St. Thomas More
Previous PostCOVID-19, Its Religious and Political Impact on Ghana: A Political-Theological Perspective Next PostPope adds three new invocations to the Litany of the Blessed Virgin Mary