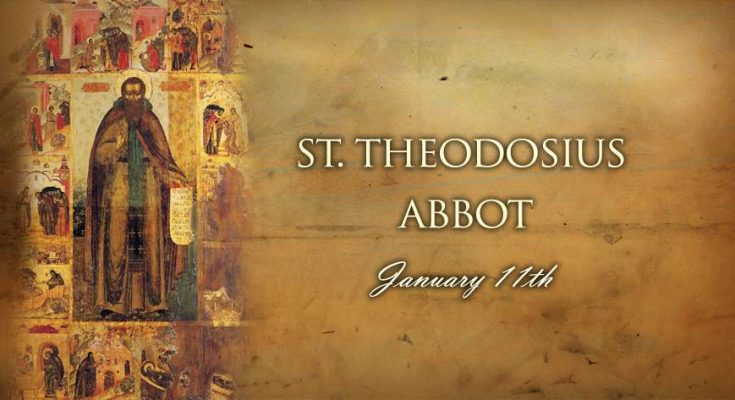 Born to a pious family in 423 A.D., Theodosius began his studies at an early age, and became a lector while still an adolescent. The example of Abraham led him to leave home in order to properly follow God. He met Saint Simeon Stylites in Antioch, and Simeon recognized him as a holy man and leader, and invited Theodosius onto his pillar for prayer, blessing, and advice. He then traveled to Jerusalem where legend says he worked with Saint Longinus, who would have been nearly 500 years old at the time. After a time, he was given charge of a small church near Bethlehem, however, his time there did not last long.

Dreading the vanity that comes from the esteem of men and unable to live in solitude with the multitude of admirers, he retired to a cave in the desert of Judah where he led a hermit’s life. Word of his holiness began to attract disciples, and Theodosius built a monastery at Cathismus to house them. So many came that there had to be sections built for Greeks, for Armenians, for Persons, etc., but they all happily worked and prayed together. Next to the monastery, he built a hospital for the sick, a hospice for the aged, and a mental hospital. He became a friend of and co-worker with Saint Sabbas and was later appointed visitor to all cenobitical communities of Palestine, the patriarch of Jerusalem.

He opposed heresies, including Eutychianism and Monophysitism. Emperor Anastatius, a supporter of Eutychianism, once sent Theodosius a large bribe, hoping to sway the influential monk to his thinking, however, Theodosius distributed the money to the poor, and continued to preach against heresy. Because of his orthodox views, Anastatius removed him from his position in 513, but he soon resumed his duties under emperor Justinian.

He continued to work until his health gave out, and spent the rest of his time praying for his community. He died at the age of 105.