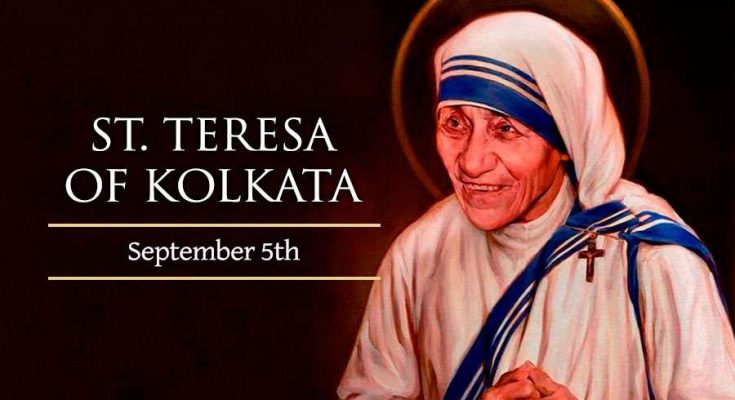 Saint of the day: St. Teresa of Kolkata

The Church celebrates on Septermber 5 the feast of Mother Teresa, a universal symbol of God’s merciful and preferential love for the poor and forgotten.

Mother Teresa was born Agnes Gonxha Bojaxhiu on August 26, 1910, in Skopje, Macedonia, the youngest of three children. She attended a youth group called Sodality, run by a Jesuit priest at her parish, and her involvement opened her to the call of service as a missionary nun.

She joined the Sisters of Loretto at age 17 and was sent to Calcutta where she taught at a high school. She contracted Tuberculosis and was sent to rest in Darjeeling. It was on the train to Darjeeling that she received her calling – what she called “an order” from God to leave the convent and work and live among the poor. At this point she did not know that she was to found an order of nuns, or even exactly where she was to serve. “I knew where I belonged, but I did not know how to get there,” she said once, recalling the moment on the train.

Confirmation of the calling came when the Vatican granted her permission to leave the Sisters of Loretto and fulfill her calling under the Archbishop of Calcutta. She started working in the slums, teaching poor children, and treating the sick in their homes. She was joined a year later by some of her former students and together they took in men, women, and children who were dying in the gutters along the streets and cared for them.

In 1950 the Missionaries of Charity were born as a congregation of the Diocese of Calcutta and in 1952 the government granted them a house from which to continue their service among Calcutta’s forgotten.

The congregation very quickly grew from a single house for the dying and unwanted to nearly 500 around the world. Mother Teresa set up homes for AIDS sufferers, for prostitutes, for battered women, and orphanages for poor children.

She often said that the poorest of the poor were those who had no one to care for them and no one who knew them. And she often remarked with sadness and desolation of milliions of souls in the developed world whose spiritual poverty and loneliness was such an immense cause of suffering.

She was a fierce defender of the unborn saying: “If you hear of some woman who does not want to keep her child and wants to have an abortion, try to persuade her to bring him to me. I will love that child, seeing in him the sign of God’s love.”

Mother Teresa once said, “A sacrifice to be real must cost, must hurt, must empty ourselves. The fruit of silence is prayer, the fruit of prayer is faith, the fruit of faith is love, the fruit of love is service, the fruit of service is peace.” She also said, “give yourself fully to God. He will use you to accomplish great things on the condition that you believe much more in His love than in your own weakness.”

Share this
TAGMother Teresa Saint of the day St. Teresa of Kolkata
Previous PostWhy Religious Who Depart from Their Institutes in Africa Struggle to Fit in Secular World Next PostKonongo-Mampong Diocese alerts of ordination date change