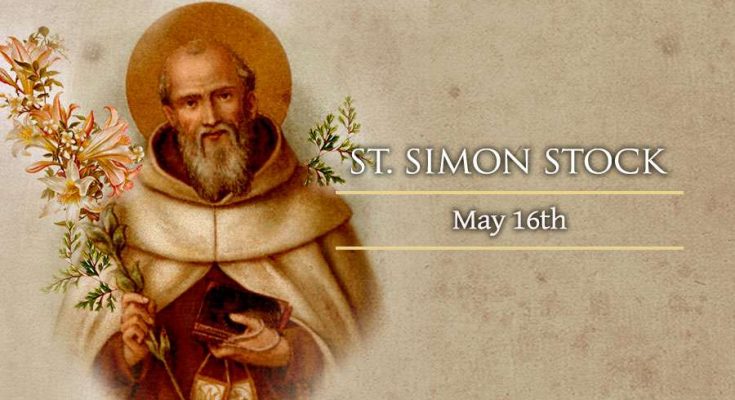 Simon Stock, born in England, lived in the 13th century. He was the Prior of the Carmelite religious order. The Blessed Virgin Mary is traditionally said to have appeared to him and given him the Carmelite habit, the Brown Scapular which you see in the picture.

Therefore, devotion to Saint Simon Stock is usually associated with devotion to Our Lady of Mount Carmel.

The Brothers of the Blessed Virgin Mary of Mount Carmel had their origin as a Christian hermit community in Palestine. In the early 13th century, the members moved to Europe where they became mendicant friars.

Simon was known for holiness during his life, and miracles attest to this after his death. He is said to have died in Bordeaux on May 16, though the year is not documented. The surname “Stock” which means “tree trunk”, is related to a story that the Saint lived for a time in a hollow tree before the arrival of the Carmelites in England, in keeping with prophetic tradition.

He is believed to have lived at Aylesford in Kent, a place that hosted in 1247, the first general chapter of the Carmelite Order held outside the Holy Land, and where there is still a monastery of Carmelite friars.

Saint Simon was possibly the fifth or sixth Prior General of the Carmelites from about the year 1256-1266. During his service, the order spread widely in southern and western Europe, especially in England.

Simon Stock is credited with founding houses in the university cities of that era, as in 1248 at Cambridge, in 1253 at Oxford, in 1260 at Paris and Bologna. This effort was important for both the growth of the institution and for the training of its younger members.

Stock lived an ascetic life. He lived on a diet of herbs, roots and wild apples and drank only water. He died in Bordeaux, France, where he was buried.

The Saint’s bones are still preserved in a cathedral in Bordeaux. His tibia was brought to England in the 1860s for the Carmelite church in Kensington, a part of the skull was enshrined at Aylesford in 1950.

St. Simon, pray for us. Happy feast day to all Simon.

Saint of the day: St. Dymphna, Patroness of the Mentally Ill

Share this
TAGSaint of the day Simon Stock
Previous PostSaint of the day: St. John I, Pope and Martyr Next PostPriests in Koforidua Diocese donate medical supplies worth GHS16,620 to health facilities

One thought on “Saint of the day: St. Simon Stock, Patron of English Province of Discalced Carmelites”