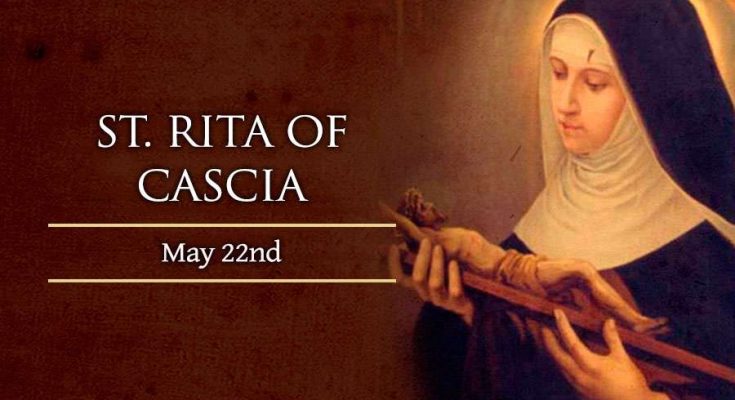 Saint of the day: St. Rita of Cascia

At an early age Rita begged her parents to allow her to enter a convent. Instead, they arranged a marriage for her. Rita was a good wife and a good mother but her husband was a man of violent temper. In anger, he often mistreated his wife. He even taught their children, two boys, his own evil ways.

Rita tried to perform her duties faithfully and to pray and receive the sacraments frequently.

Her husband was stabbed by an enemy one day, but before he died, he repented because Rita prayed for him daily.Shortly afterwards, her two sons died because they had taken after their father’s evil ways and Rita had begged God that if her sons will live and be evil, then He God should take them.

Rita became alone in this world. Praying, fasting, penance of many kinds and good works filled her days. She was later admitted into the convent of the Augustinian nuns and began a life of perfect obedience and great charity.

Sr. Rita had a great devotion to the Passion of Christ. “Please let me suffer like You, Divine Saviour”, she said one day, and suddenly one of the thorns from the crucifix she was standing under struck her on the forehead. It left a deep wound which did not heal and which caused her much suffering until her death on May 22, 1457.

Great faith, and ardent desire for the love of God, we can do anything. May the constant love and intercession of St Rita, who help solve impossible cases, help us to know and believe that God is always with us, understand our sufferings and wish for us to be strong and humble in our suffering as He, Christ did. Amen

St. Rita, Patroness of impossible cases, pray for us. Amen
Happy feast day to all Rita

One thought on “Saint of the day: St. Rita of Cascia”