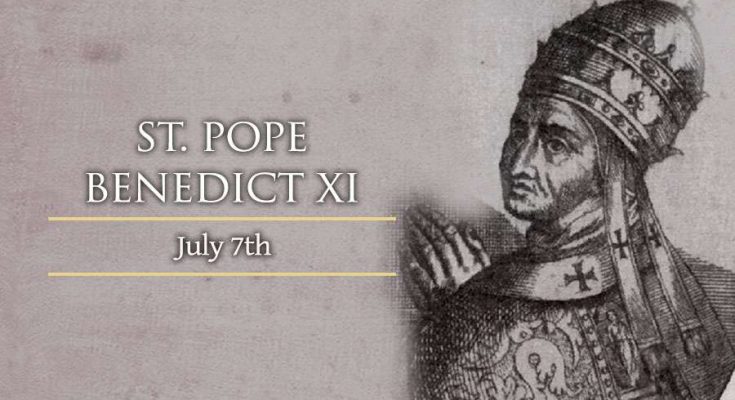 Nicholas Boccasini was born at Treviso, Italy, in 1240. Hhe entered the Dominican Order at the age of 14. After 14 years of study, he became lector of theology, an office he filled for several years.

In 1296 he was elected Master General of the Order. At this same time hostility towards Boniface VIII was becoming more pronounced, and the new general issued an ordinance forbidding his subjects to favour in any way the opponents of the reigning pontiff. He also enjoined them to defend in their sermons, when opportune, the legitimacy of the election of Boniface. This loyalty of Boccasini, which remained unshaken until the end, was recognized by Boniface, who showed him many marks of favour and confidence. Thus with the two cardinal-legates, the Dominican General formed the important embassy, the purpose of which was the concluding of an armistice between Edward I of England and Philip IV of France, then at war with each other.

In the year 1298 Boccasini was elevated to the cardinalate, and was afterwards appointed Bishop of Ostia and Dean of the Sacred College. During this time Hungary was rent by civil war, so the cardinal-bishop was sent there by the Holy See as legate a latere to labour for the restoration of peace. At the time of his return of the legate to Rome, the famous feud between Boniface VIII with Philip the Fair had reached its height. When, in 1303, the enemies of the pope had made themselves masters of the sacred palace, of all the cardinals and prelates only the two Cardinal-Bishops of Ostia and Sabina remained at the side of the venerable Pontiff to defend him from the violence of William of Nogaret and Sciarra Colonna.

A month after this scene of violence, Boniface died, and Boccasini was unanimously elected Pope on October 22, taking the name of Benedict XI. The principal event of his pontificate was the restoration of peace with the French court. He was Pope for only one year (1303-1304), dying in Perugia on July 7, 1304.

Benedict XI was beatified in the year 1773. His feast is celebrated in Rome and throughout the Dominican Order on the 7th of July. He is the author of a volume of sermons and commentaries on a segment of the Gospel of St. Matthew, on the Psalms, the Book of Job, and the Apocalypse.