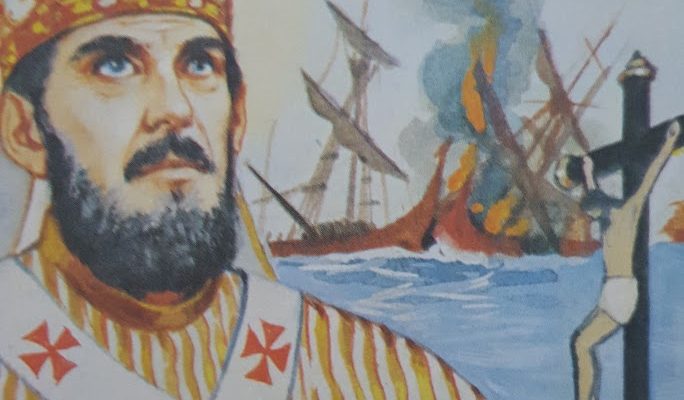 Michael Ghislieri was born in Italy in 1504. His whole life was always guided by the most perfect maxims of Christian piety. At the age of fifteen, he received the Dominican habit and at once became a model of religious perfection.

In 1528, he was ordained a priest and then taught philosophy and theology for sixteen years. He also filled other important positions in his Order.

Pope Pius IV in 1556 promoted him to the united Bishoprics of Nepi and Sutri in the Papal States and in 1557, the same Pope created him Cardinal, but his humility and other virtues only became more conspicuous in this exalted position.

Pius IV, who succeeded Paul IV in 1559, moved him to the diocese of Mondori in Piedmont. At the conclave which was held on the death of Pius IV, St Charles Borromeo united the suffrages in favour of Cardinal Alexandrinus, as Ghislieri was called, and he became Pope under the title of Pius V in 1566.

His reign was faced with getting a scattered church back on its feet. He was charged with the task of carrying out the sweeping reforms called for by the Council of Trent which lasted eighteen years. He spent long hours with his God in prayer, fasted and deprived himself of many papal luxuries.

He ordered the founding of seminaries for the proper training of priests, published a new Missal, Breviary, and Catechism and also established the Confraternity of Christian Doctrine (CCD) classes for the young. This Saintly Pontiff served the poor and sick by building hospitals and providing food for the hungry.

His life as Sovereign Pontiff was as exemplary as it had been while he was a simple Dominican Friar. It was during his pontificate that he was able to organise a fleet which won a decisive famous victory against the Turks in the Gulf of Lepanto, off Greece on October 7, 1571, under Don John of Austria. As a result of this victory, he ordered the feast of the Holy Rosary to be observed on the first Sunday of October.

His reign was one of great renewal and reforms in the Church.

St Pope Pius V, Pray for us. Happy feast day to all Pius.