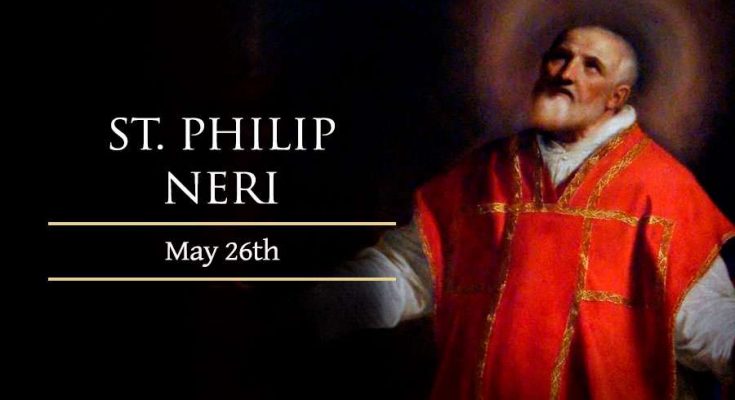 Saint of the day: St. Philip Neri, Patron of Rome

Philip was born in Florence, Italy in the year 1515 to a poor family. Philip went to Rome to act as a teacher for two young boys. While there, he began to visit hospitals of the city taking a great interest in the sick and poor pilgrims. It was not long before he formed a society for this work.

After his priestly ordination, he stayed with his society. He helped the boys of Rome when they were in trouble. He found places for them to play just like St John Bosco. He would help a poor man, nurse a sick person, look for money for a poor pilgrim, or console a a sinner in the confessional.

He encouraged frequent confession and communion. But he was not strict with the people, he rather expected them to do their best. Young and old were attracted to his cheerful holiness and came in large numbers to hear his words of wisdom.

In order to spread his work, he founded the Congregation of the Oratory, which is a group of priests dedicated to preaching and teaching.

For sixty-two years, Philip Neri gave wise advice and a holy example to all classes of people in Rome and filled their hearts with the love of God. In the year 1595, St Philip Neri passed away quietly to his Maker.

There are people like St Phillip. Let always encourage them and pray that we may all be like the good samaritan as he was. Let our actions depict our words and they should reflect love for one another regardless of whether we know them or not.

St. Philip Neri, pray for us. Happy feast day to all Philip.

Saint of the day: St. Bede the Venerable, Priest and Doctor of the Church

Share this
TAGSaint Neri Saint of the day
Previous PostOpinion: learning to pray like Jesus through vocal, meditative and contemplative Prayers Next PostSaint of the day: St. Bede the Venerable, Priest and Doctor of the Church

2 thoughts on “Saint of the day: St. Philip Neri, Patron of Rome”