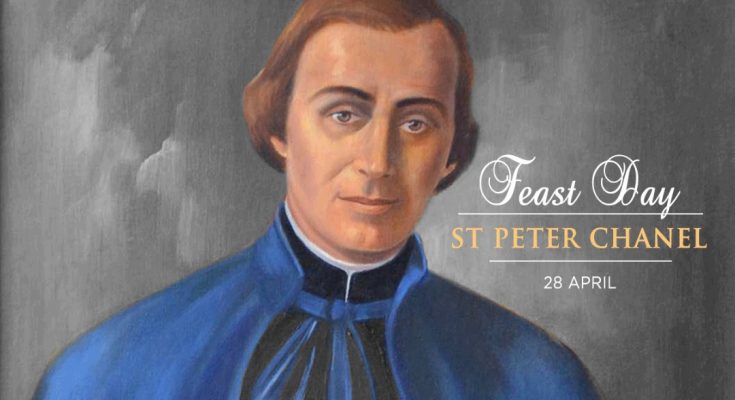 Saint of the day: St. Peter Chanel, Priest and Martyr

St. Peter was born in Clet in the diocese of Belley, France in 1803. He became a diocesan priest and in three years completely revitalised the first parish to which he was assigned.

Since his mind was set on missionary work, Peter joined the newly formed Society of Mary (Marists), which concentrated on missionary work at home and abroad. To his dismay, he was appointed to teach at the seminary of Belley and remained there for five years, diligently performing his duties.

In 1836, Peter was sent to the New Hebrides as the superior of a little group of missionaries. After a long and arduous ten-month journey, the group split up with Peter and two others going to evangelise the island of Futuna.

Once there, they made headway in converting the island’s population, attracting even the son of the King. Another St Kizito. As a result of this, the King dispatched a group of warriors upon the Saint and his missionaries.

On April 28, 1841, three years after his arrival, St Peter was seized and clubbed to death by those he had come to save. And his death brought his work to completion because, within five months, the entire island was converted to the faith. He was canonised in 1954 by Pope Pius XII.

When we are led by God to do something, like Abraham and now St Peter, let us do so with our whole being because so long as God is involved, even if we are killed or naturally die, our work will come to fruition. Our beginning shall see its end successfully. As we read about St Peter Chanel, may we bear this thought in our minds and be guided in our daily activities. Amen

St Peter Chanel, pray for us.

Happy feast day to all Peter.