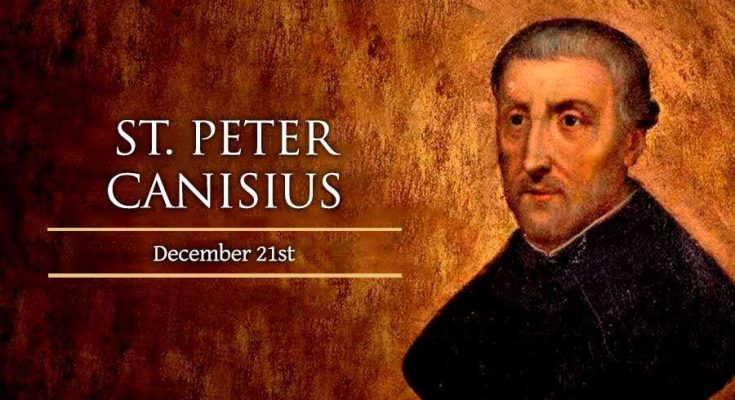 An important figure in the Catholic counter-reformation that responded to the 16th century spread of Protestantism, the priest and Doctor of the Church Saint Peter Canisius is remembered liturgically on Dec. 21.

His efforts as a preacher, author, and religious educator strengthened the Catholic faith in Germany, Austria, Switzerland, and parts of Central Europe during a period of doctrinal confusion.

Writing about St. Peter Canisius in 1897, Pope Leo XIII noted similarities between the late 19th century and the saint’s own lifetime, “a period when the spirit of revolution and looseness of doctrine resulted in a great loss of faith and decline in morals.”

More recently, in a 2011 general audience, Pope Benedict XVI taught that the Jesuit saint found success in ministry by living as “a personal witness of Jesus and an instrument at his disposal, bound to him closely by faith in his Gospel and in his Church.”

Peter Kanis – his name later Latinized to “Canisius” – was born in the Netherlands during May 1521. His father Jacob was a wealthy public official, but his mother Aegidia died soon after his birth. Peter began his university studies in Cologne around age 15, and obtained his master’s degree before he turned 20. His friends during this period included several men who held to the Catholic faith in opposition to the Protestant doctrines then gaining ground in Germany.

Despite his father’s preference that he should marry, Peter made a decision in 1540 to remain celibate. Three years later he entered the Society of Jesus under the influence of Blessed Peter Faber, one of the first companions of Saint Ignatius Loyola. He founded the first Jesuit house in Germany and became a priest in 1546.

Only one year after his ordination, Peter accompanied the Bishop of Augsburg to the Council of Trent as a theological adviser. He spent a portion of his time in Italy working directly with Saint Ignatius Loyola, before leaving for Bavaria where he would serve as a university professor as well as a catechist and preacher. This combination of academic and pastoral work continued at Vienna from 1552, allowing him to visit and assist many Austrian parishes which found themselves without a priest.

During the mid-1550s Peter’s evangelistic journeys took him to Prague, where he eventually founded a Jesuit school along with another in Bavaria, and later a third in Munich. The year 1555, in particular, was a landmark for Canisius: St. Ignatius promoted him to a leadership position within the order, which he held until 1569, and he published the first and longest version of his Catholic catechism. This work, and its two shorter adaptations, went through hundreds of printings and remained in use for centuries.

Involved in discussions with Protestants during 1557, Peter made a strong case for the Church by showing how the adherents of Protestantism could not agree with one another in matters of doctrine. Meanwhile, he maintained his commitment to religious instruction on the popular level – teaching children, giving retreats, and preaching carefully-crafted, doctrinally-rich sermons to large crowds.

Canisius’ service to the Council of Trent continued during the early 1560s, though mostly from a distance. He kept up a demanding schedule of preaching and establishing universities, while also working to ensure that the council’s decrees were received and followed in Germany after it concluded. His tireless efforts over the next two decades contributed to a major revival of German Catholicism.

A mystical experience in 1584 convinced Canisius that he should cease his travels and remain in Switzerland for the rest of his life. He spent his last years building up the Church in Fribourg through his preaching, teaching, and writing. Peter suffered a near-fatal stroke in 1591, but recovered and continued as an author for six years. The Dutch Jesuit saw writing as an essential form of apostolic work, a view supported by the continued use of his catechism long after his death on Dec. 21, 1597.

St. Peter Canisius was simultaneously canonized and declared a Doctor of the Church by Pope Pius XI in May of 1925. In a famous saying, the Jesuit priest revealed the secret behind the accomplishments of his energetic and fruitful life: “If you have too much to do, with God’s help you will find time to do it all.”

Share this
TAGSaint of the day St. Peter Canisius
Previous PostMESSAGE BY CURED LEPERS TO VERY REV. FR. DR. ANDREW CAMPBELL ON HIS GOLDEN JUBILEE AS A PRIEST Next PostStop Posting Holiday Details on Social Media during Festivities – Adib Saani 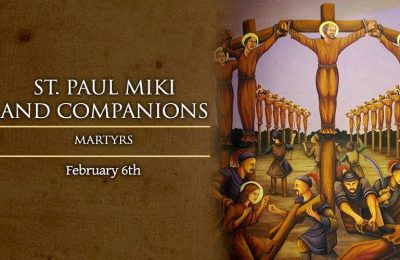 Saint of the day: St. Paul Miki and Companions