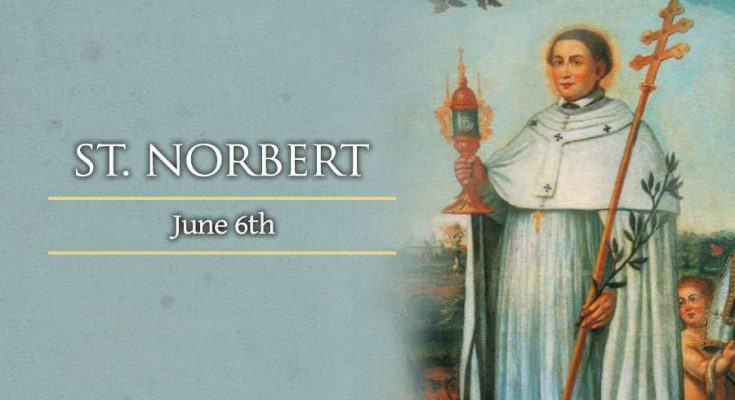 Saint of the day: St. Norbert,  Patron invoked during Childbirth for safe Delivery

Norbert was born in Xanten, near the Rhineland in Germany where he grew up and was also educated. His father, Herbert was Count of Gennep and was also a member of the high nobility of the Holy Roman Empire. His mother was Hedwig of Guise.

Through the influence of his family he obtained financial subsidy from the parish church of St. Victor at Xanten when he accepted ordination to the subdeaconate. His only task was to chant the Divine Office at the Church, but he had his eyes set on worldly joy and paid someone a small fee to take his place in the choir, because he had gained an appointment as a chaplain to the emperor Henry V in Cologne. The salaries from the Xanten fund and the royal treasury were enough to equip him to live in the style of the nobility of the times.

Norbert avoided ordination to the priesthood and even declined an appointment as bishop of Cambrai in 1113. One day in the spring of 1115, as he rode his horse to Vreden, in the western part of the Münsterland, a thunderbolt from a sudden storm struck at his horse’s feet. The animal threw him on the ground where he lay unconscious for nearly an hour.

After this near-fatal accident, his faith deepened became he realised that he should have died. He renounced his appointment at Court to Henry V and returned to Xanten to lead a life of penance, placing himself under the direction of Cono, Abbot of St Sigeberg, near Cologne.

In gratitude to Cono, in 1115, Norbert founded the Abbey of Fürstenberg, endowed it with a portion of his property, and gave it to Cono of Siegburg and his Benedictine successors.

When he reached his thirty-fifth year, he was ordained to the priesthood. Norbert was a great devotee of the Blessed Eucharist and Our Lady. He also adopted an asceticism so fierce that it killed his first three disciples.

This may account for the failure of his attempts to reform the canons of Xanten, who denounced him as an innovator at the Council of Fritzlar in 1118. He then resigned his position, sold all his property and gave the proceeds to the poor.

He visited Pope Gelasius II, who gave him permission to become an itinerant preacher and preached throughout lands which is today western Germany, Belgium, the Netherlands and northern France and being credited with a number of miracles. Settlement after settlement, he encountered a demoralized clergy, lonely, often practicing concubinage and feeling that the official Church cared little about them which of course was not true.

In Paris he witnessed the Canons of St. Victor, who had adopted the ascetic ideals of William of Champagne. At Clairvaux and Citeaux he saw the Cistercian reforms among the monks. He also became acquainted with the Cistercian administrative system that created an international federation of monasteries with fair amount of centralized power, though local houses had a certain amount of independence. These reforms, written up in their “Charter of Charity” affected him significantly in his own future work.

St. Norbert, pray for us. Happy feast day to all Norbert.

Share this
TAGSaint of the day St. Norbert
Previous PostHo Diocese directs parishes and outstations to remain closed to in-person service Next PostSaint of the day: St. Boniface, Bishop & Martyr, Patron of Germany