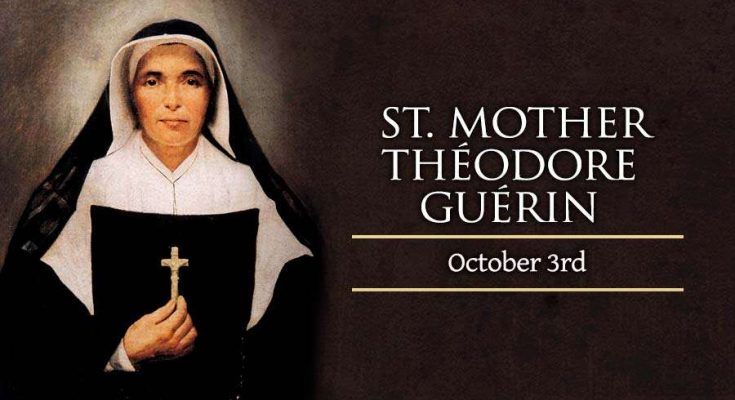 As she was growing up, the French government was virulently anti-clerical, closing down seminaries and churches and arresting priests and religious.  Her cousin was a seminarian who lived in hiding in her parents’ devout Catholic home. He instructed her thoroughly in the faith and she displayed an advanced knowledge of theology, even at a young age.

Anne-Thérèse entered the Sisters of Providence at 26 and devoted herself to religious education. Her intellectual capacities were formidable, and she was even recognized by the French Academy for her achievement.

In 1840 Mother Théodore Guérin was sent to Indiana, in the USA to found a convent of the Sisters of Providence in the diocese of Vincennes.  There she pioneered Catholic education, opened the first girls’ boarding school in Indiana, and fought against the anti-Catholicism prevalent in the day.

She was well known for her heroic witness to faith, her hope, and her love of God. The fledgling years of the convent of Our Lady of the Woods were difficult, with the ever-present danger of it being burned down by anti- Catholics. The persecution also came from within the Church, from her own bishop, who, on not being allowed to tamper with the order’s rule, excommunicated her.  The ex-communication was eventually lifted by his successor.

James Cardinal Gibbons said of her in 1904, that she was “a woman of uncommon valour, one of those religious athletes whose life and teachings effect a spiritual fecundity that secures vast conquests to Christ and His holy Church.”

She was beatified by Pope John Paul II on October 25, 1998, and canonized a saint of the Roman Catholic church on October 15, 2006, by Pope Benedict XVI.

Share this
TAGSaint of the day St. Theodore Guerin
Previous PostWho was Carlo Acutis? Next PostCarlo Acutis' tomb is opened for veneration ahead of beatification