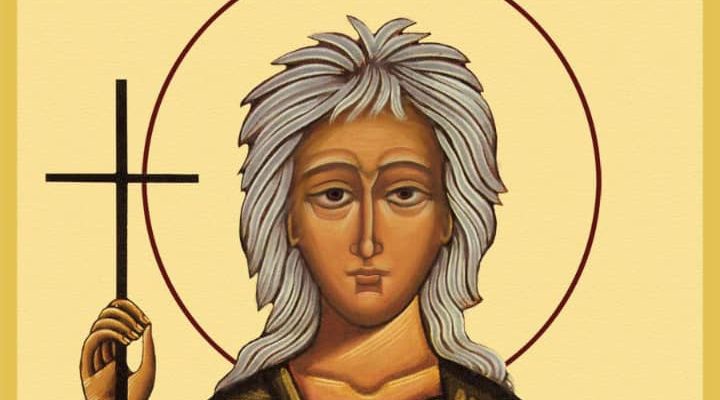 Saint of the day: St. Mary Of Egypt

Saint Mary, also known as Maria Aegyptiaca, was born in the Province of Egypt. At the age of twelve, she ran away from her parents to the city of Alexandria. Here she lived an extremely dissolute life. In her Vita, it states that she often refused the money offered for her sexual favours, as she was driven “by an insatiable and an irrepressible passion,” and that she mainly lived by begging, supplemented by spinning flax.

After seventeen years of this lifestyle, she traveled to Jerusalem for the Great Feasts of the Exaltation of the Holy Cross. She undertook the journey as a sort of anti-pilgrimage, stating that she hoped to find in the pilgrim crowds at Jerusalem even more partners in her lust. She paid for her passage by offering sexual favours to other pilgrims, and she continued her habitual lifestyle for a short time in Jerusalem. Her Vita relates that when she tried to enter the Church of the Holy Sepulchre for the celebration, she was barred from doing so by an unseen force.

Realizing that this was because of her impurity, she became remorseful and upon seeing an icon of the Theotokos, that is, the Virgin Mary outside the church, she prayed for forgiveness and promised to give up the world. Then she attempted again to enter the church, and this time was permitted in. After venerating the relic of the true Cross, she returned to the icon to give thanks, and heard a voice telling her, “If you cross the Jordan, you will find glorious rest.” She immediately went to the monastery of St John the Baptist on the bank of the River Jordan, where she received absolution and afterwards Holy Communion. The next morning, she crossed the Jordan and retired to the desert to live the rest of her life as a hermit in penitence. She took with her only three loaves of bread, and once they were gone, she lived only on what she could find in the wilderness.

Approximately a year before her death, she recounted her life to St Zosimas of Palestine, who encountered her in the desert. When he unexpectedly met her in the desert, she was completely naked and almost unrecognizable as human. She asked Zosimas to toss her his mantle to cover herself with, and then she narrated her life’s story to him. She asked him to meet her at the banks of the Jordan, on Holy Thursday of the following year, and bring her Holy Communion. When he fulfilled her wish, she crossed the river to get to him by walking on the surface of the water, and received Holy Communion, telling him to meet her again in the desert the following Lent.

The following year, Zosimas travelled to the same spot where he first met her, some twenty day’s journey from his monastery, and found her lying there dead. According to an inscription written in the sand next to her head, she had died on the very night he had given her Communion and had been somehow miraculously transported to the place he found her, and her body was preserved incorrupt. He buried her body with the assistance of a passing lion. On returning to the monastery he related her life story to the brethren, and it was preserved among them as oral tradition until it was written down by St. Sophronius.

According to tradition, Zosimas lived almost a hundred years, dying in the sixth century, and the Vita states that he was fifty-three years old when he met Saint Mary.

Hmm, we blame people, abuse them, laugh at them insult them and even sometimes hassle them just because we know their life stories and we think we are holier than they are. Well, God has proven us wrong again. Someone who even gave sexual favours free of charge is deeply loved by God to the extent that her “sinful body” is incorrupt. Amazing, totally baffling. May we seriously learn from the life of St Mary of Egypt, that when we sin we should accept it and remain there. Even the most atrocious sinner can be saved. God, love us all. Never be afraid to go for confession and ask God for a fresh start.

Share this
TAGSaint of the day ST MARY OF EGYPT
Previous PostOpinion: The If And Would've: Stay Quarantined Next PostAlmighty God: Fr Salifu writes on the attributes of God