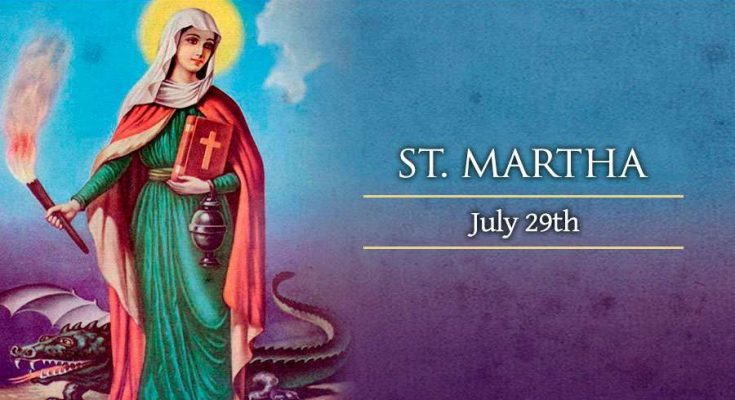 The name Martha is a Latin transliteration of the Koine Greek Μάρθα, itself a translation of the Aramaic מַרְתָּא Martâ, meaning “the mistress” or “the lady”, from מרה “mistress”, feminine of מר “master”. The Aramaic form occurs in a Nabatean inscription found at Puteoli, and now in the Naples Museum. It is dated AD 5 (Corpus Inscr. Semit., 158); also in a Palmyrene inscription, where the Greek translation has the form Marthein.

In the Gospel of Luke, Jesus visits the home of two sisters named Mary and Martha. The two sisters are contrasted. Martha was “worried about many things” while Jesus was their guest at the same time, Mary had chosen “the better part”, that of listening to the master’s discourse. The name of their village is not recorded.

As Jesus and his disciples were on their way, he came to a village where a woman named Martha opened her home to him. She had a sister called Mary, who sat at the Lord’s feet listening to what he said. But Martha was distracted by all the preparations that had to be made. She came to him and asked, “Lord, don’t you care that my sister has left me to do the work by myself? Tell her to help me!”
“Martha, Martha,” the Lord answered, “you are worried and upset about many things, but only one thing is needed. Mary has chosen what is better, and it will not be taken away from her.”

In the Gospel of John, Martha and Mary appear in connection with two incidents, the raising from the dead of their brother Lazarus in John 11 and the anointing of Jesus in Bethany John 12:3. In the account of the raising of Lazarus, Jesus meets with the sisters in turn. Martha followed by Mary. Martha goes immediately to meet Jesus as he arrives, while Mary waits until she is called. As one commentator notes, “Martha, the more aggressive sister, went to meet Jesus, while quiet and contemplative Mary stayed home. This portrayal of the sisters agrees with that found in Luke 10:38–42.” In speaking with Jesus, both sisters lament that he did not arrive in time to prevent their brother’s death. “Lord, if you had been here, my brother would not have died”. But where Jesus’ response to Mary is more emotional and his response to Martha is one of teaching, calling her to hope and faith.

“Yes, Lord”, she told him, “I believe that you are the Christ, the Son of God, who was to come into the world.”

Martha appears again in John 12:1–8, where she serves at a meal held in Jesus’ honor at which her brother is also a guest. The narrator only mentions that the meal takes place in Bethany, while the apparently parallel accounts in the Gospels of Matthew[13] and Mark[14] specify that it takes place at the home of one Simon the Leper. As the Catholic Encyclopedia notes, “We are surely justified in arguing that, since Matthew and Mark place the scene in the house of Simon, St. John must be understood to say the same.

A woman of virtue, a gentle soul of holiness who frets over everything. May St Martha teach us what is needed at what time and when when to lay all our burden at the feet of Jesus.

St. Martha, pray for us. Amen. Happy feast day to all Martha.