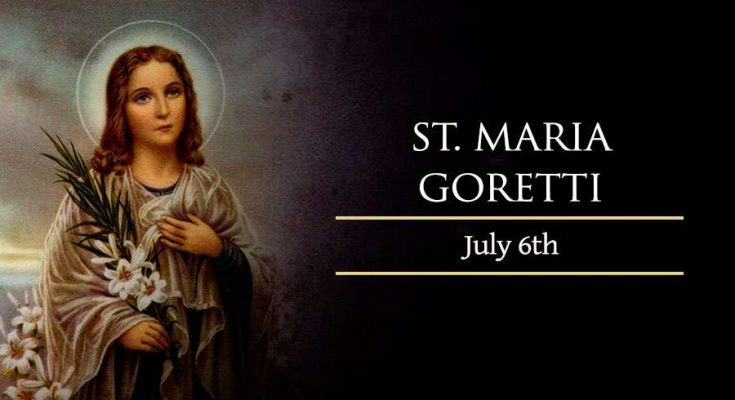 July 6 marks the feast day of St. Maria Goretti, a young virgin and martyr whose life is an example of purity and mercy for all Christians.

St. Maria Goretti is best known for her commitment to purity and the courageous defence of her faith at the young age of eleven that made her willing to undergo death rather than participate in a sin against God. She is also remarkable for the forgiveness she willingly granted her attacker as she lay on her deathbed.

Maria was born in Corinaldo, Italy on October 16, 1890. Her father, a farmer, died of malaria when she was young, and her mother had to work to support their six children.

Maria took care of the younger children while her mother worked, and she prayed the Rosary every night for the repose of her father’s soul. She grew in grace and maturity, and her cheerful obedience and piety were noticed by those around her.

On July 5, 1902, a neighbouring farm hand, Alessandro Serenelli, tried to rape Maria. On several prior occasions, Alessandro had harassed Maria with impure advances, all of which she has vehemently rejected. This time, he locked her in a room and tried to force himself upon her. She fought against him, shouting, “No! It is a sin! God does not want it!” and warning him that this was the path towards hell. When Maria declared that she would rather die than submit to this sin, Alessandro angrily grabbed her and stabbed her 14 times with a knife.

Maria was found bleeding to death and rushed to the hospital. As she lay dying, she forgave Alessandro for the crime he had committed against her, saying, “Yes, for the love of Jesus I forgive him…and I want him to be with me in Paradise.”

Although the doctors tried to save her, she died two agonizing days later, only eleven years old.

Alessandro was sentenced to 30 years in prison. He remained unrepentant until one night, eight years into his prison term, when Maria appeared to him, dressed in white, gathering lilies in a garden. She smiled, turned towards Alessandro, and offered him the flowers. Each lily he took transformed into a white flame. Then Maria disappeared.

From that moment, Alessandro converted and found peace. He repented of his crime and changed his life. He was released from prison three years early and begged forgiveness from Maria’s mother, which she duly granted.

Alessandro moved to a Capuchin monastery, working in the garden as a tertiary for the remainder of his life. He was one of the witnesses who testified to Maria’s holiness during her cause of beatification, citing the crime and the vision in prison.

Many miracles were attributed to Maria Goretti after her death. In 1950, she was canonised by Pope Pius XII, becoming the youngest Roman Catholic saint officially recognised by name. Her feast day is celebrated by the Church on July 6, and she is the patron saint of purity, rape victims, young women, and youth in general.

On her feast day in 2003, Pope John Paul II spoke about St. Maria Goretti at his Sunday Angelus, noting that her life provides an exemplary witness of what it means to be “pure of heart.”

“What does this fragile but christianly mature girl say to today’s young people, through her life and above all through her heroic death?” asked the Pope.

“Marietta, as she was lovingly called, reminds the youth of the third millennium that true happiness demands courage and a spirit of sacrifice, refusing every compromise with evil and having the disposition to pay personally, even with death, faithful to God and his commandments.”

“How timely this message is,” the Holy Father continued. “Today, pleasure, selfishness and directly immoral actions are often exalted in the name of the false ideals of liberty and happiness. It is essential to reaffirm clearly that purity of heart and of body go together, because chastity ‘is the custodian’ of authentic love.”

Share this
TAGSaint of the day St. Maria Goretti
Previous PostOpinion: Ending Child Abuse in Ghana and in the Church, taking moral lessons from St. Maria Gorreti Next PostPOJOBA Donates to Staff of Alma Mater