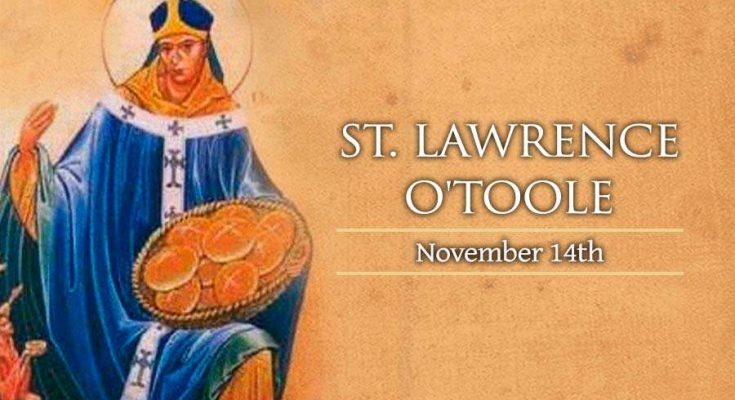 St. Lawrence O’Toole was born around 1128 in County Kildare, Ireland. His father was the chief of Hy Murray, and his mother one of the Clan O’Byrne. At the age of 10, Lawrence was given up as a hostage to King Mac Murehad of Leinster, who treated him with such inhumanity that his father obliged the King to turn him over to the Bishop of Glendalough.

St. Lawrence grew to be such a model of virtue, that at the young age of 25 he was chosen to replace the Bishop as abbot upon the Bishop’s death. He governed his community with virtue and prudence, and was unanimously chosen to fill the new See of Dublin in 1161.

In 1171, St. Lawrence visited King Henry II of England to handle affairs of his diocese. While approaching the altar to officiate at Mass, the Archbishop was violently attacked by a maniac. Everyone present thought he was mortally wounded, but Saint Lawrence came to, asked for some water, blessed it and applied it to his wound. The bleeding immediately stopped and the Archbishop continued to celebrate Mass.

St. Lawrence was most widely known for his piety, charity, and prudence, and was respected as a negotiator.