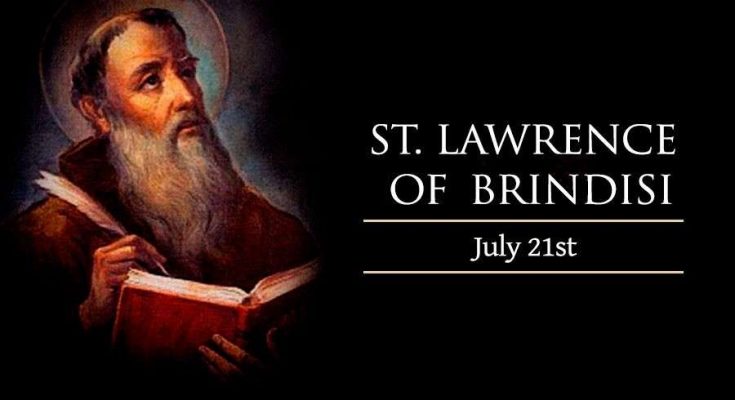 Saint of the day: St. Lawrence of Brindisi, Priest

He was born on July 22, 1559 as Giulio Cesare Russo in Brindisi, Kingdom of Naples in Italy to a family of Venetian merchants. After the early death of his parents, he was raised by his uncle. Lawrence was educated at Saint Mark’s College in Venice.

He joined the Capuchins in Verona as Brother Lawrence and received further instruction from the University of Padua and was ordained a priest at the age of twenty three. He was an accomplished linguist. In addition to his native Italian, Lawrence could read and speak Latin, Hebrew, Greek, German, Bohemian, Spanish, and French fluently.

At the age of thirty-one, Lawrence was elected superior of the Capuchin Franciscan province of Tuscany. He was appointed definitor general to Rome for the Capuchins in 1596. Pope Clement VIII assigned him the task of preaching to the Jews in the city and was sufficiently proficient in Hebrew that the rabbis assumed he had been a convert from Judaism.

In early 1599, Lawrence established Capuchin monasteries in modern Germany and Austria, furthering the Counter-Reformation and bringing many Protestants back to the Catholic faith. This was during the time Martin Luther and his friends left the Church.

In 1601, he served as the imperial chaplain for the army of Rudolph II, Holy Roman Emperor, and successfully recruited Philippe Emmanuel, Duke of Mercœur, to help fight against the Ottoman Turks. He then led the army during the brief liberation of Székesfehérvár in Hungary from the Ottoman Empire, armed only with a crucifix.

Then in 1602, he was elected vicar general of the Capuchin friars, the highest office in the Order at the time. He was elected again in 1605, but refused the office. He entered the service of the Holy See, becoming papal nuncio to Bavaria and after serving as nuncio to Spain, he retired to a monastery in 1618. He was recalled as a special envoy to the King of Spain regarding the actions of the Viceroy of Naples in 1619 and after finishing his mission, died on his birthday in Lisbon on July 22, 1619. Wow.

After death, he was entombed at the Poor Clares’ Convento de la Anunciada (Convent of the Annunciation) in Villafranca del Bierzo, Spain. He was beautified on June 1, 1783 and canonized as a saint on December 8, 1881.

Life is never a coincidence. God has planned everything before we entered it. To be born and die on the same date but different years is amazing and beautiful. Remember whatever you do in this life lives after you and every detail will be captured. Let our lives is as beautiful as a dew falling on a petal.

St. Lawrence, pray for us. Amen. Happy feast day to all Lawrence and all Capuchin Friars.

Share this
TAGSaint of the day St. Lawrence of Brindisi
Previous PostSaint of the day: St. Mary Magdalene Next PostLepers Aid Ghana Hands Over Renovated Wards to Management of the Ankaful General Hospital