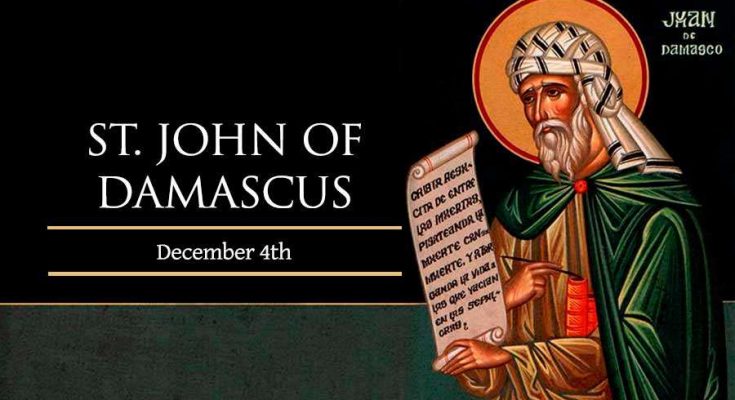 Saint of the day: St. John of Damascus

Catholics remember and celebrate the life of the great Arab Church Father St. John of Damascus on Dec. 4.

Eastern Orthodox Christians and Eastern Catholics, whose tradition has been particularly shaped by his insights, celebrate the saint’s feast on the same day as the Roman Catholic Church.

Among Eastern Christians, St. John (676-749) is best known for his defense of Christian sacred art, particularly in the form of icons. While the churches of Rome and Constantinople were still united during St. John’s life, the Byzantine Emperor Leo III broke radically from the ancient tradition of the church, charging that the veneration of Christian icons was a form of idolatry.

John had grown up under Muslim rule in Damascus, as the child of strongly Christian parents. His excellent education – particularly in theology – prepared him well to defend the tradition of sacred iconography, against the heresy of the “iconoclasts,” so-called because they would enter churches and destroy the images therein.

During the 720s, the upstart theologian began publicly opposing the emperor’s command against sacred images in a series of writings. The heart of his argument was twofold: first, that Christians did not actually worship images,  but rather, through them they worshiped God, and honored the memory of the saints. Second, he asserted that by taking an incarnate physical form, Christ had given warrant to the Church’s depiction of him in images.

By 730, the young public official’s persistent defense of Christian artwork had made him a permanent enemy of the emperor, who had a letter forged in John’s name offering to betray the Muslim government of Damascus.

The ruling caliph of the city, taken in by the forgery, is said to have cut off John’s hand. The saint’s sole surviving biography states that the Virgin Mary acted to restore it miraculously. John eventually managed to convince the Muslim ruler of his innocence, before making the decision to become a monk and later a priest.

Although a number of imperially-convened synods condemned John’s advocacy of Christian iconography, the Roman church always regarded his position as a defense of apostolic tradition. Years after the priest and monk died, the Seventh Ecumenical Council vindicated his orthodoxy, and ensured the permanent place of holy images in both Eastern and Western Christian piety.

St. John of Damascus’ other notable achievements include the “Exact Exposition of the Orthodox Faith,” a work in which he systematized the earlier Greek Fathers’ thinking about theological truths in light of philosophy. The work exerted a profound influence on St. Thomas Aquinas and subsequent scholastic theologians. Centuries later, St. John’s sermons on the Virgin Mary’s bodily assumption into heaven were cited in Pope Pius XII’s dogmatic definition on the subject.

The saint also contributed as an author and editor, to some of the liturgical hymns and poetry that Eastern Orthodox and Eastern Catholics still use in their celebrations of the liturgy.

“Show me the icons that you venerate, that I may be able to understand your faith.” – Saint John of Damascus

Share this
TAGSaint of the day St. John of Damascus
Previous PostMoral Discernment is key in your formation - Seminarians Advised Next PostFr. Campbell raises some Gh¢100,000 from book launch