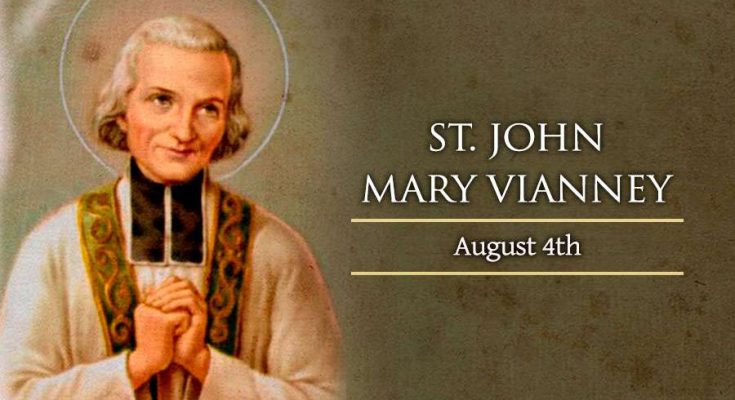 John was born in France in 1786. As a young boy, he worked in father’s fields. After work, he taught other children their prayers and catechism.

John was naturally slow to learn, but a parish priest helped him to enter the seminary. After years of hard study, he became a priest.

Fr. Vianney was sent to the little parish of Ars. The inhabitants did not come to church, so he visited them in their homes.

Fr. John ate very little and lived like the poorest of the poor. He did penance for his people and prayed for hours before the Blessed Sacrament. He usually said “this is the way to win souls to God”. He was often tormented by the devil who tried to keep him from saving souls.

Thousands came to hear him speak and to confess their sins to him. He often spent eighteen hours a day in the confessional.

He had apparitions of our dear Mother Mary, who appeared to him countless times. Some saints also used to appear to him. People gave testimonies of seeing some strange bright lights around him and he could be seen visibly talking with unseen people. A phenomenon witnessed by many people. He was called a saint even in his lifetime.

He spent forty years as the parish priest of Ars, dying at the age of seventy-three. He lies in his glass coffin, incorrupt.

A poor man. A simple soul. A man called daft. A humble being. A beautiful soul to encounter. Gentle to the afflicted. Impatient for the conversion of a sinful soul.

May St. John Mary Vianney intercede and pray for all Catholic Priests in the whole world to live after the heart of Jesus.

Share this
TAGSaint of the day St. John Mary Vianney
Previous PostParental Approval in Marriage Next PostSaint of the day: St. Waltheof of Melrose, Abbot