Home Ghana News Saint of the day: St. Joan of Arc, Patroness of France and Soldiers 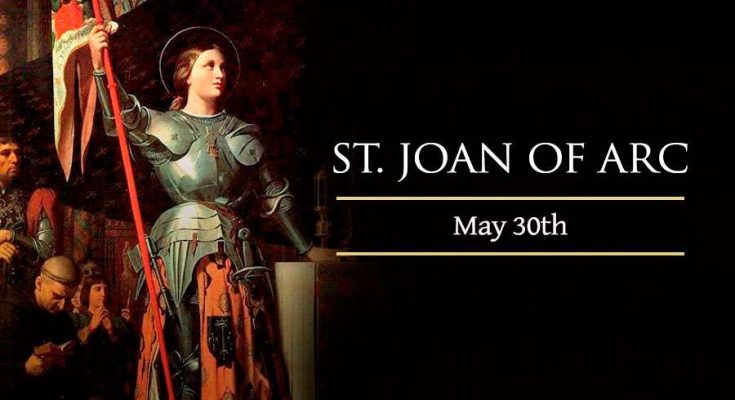 Saint of the day: St. Joan of Arc, Patroness of France and Soldiers

Joan was born in France in 1412. She helped her brothers on the farm and often went to a nearby Chapel to pray to Jesus.

When she was seventeen, Joan heard the voice of God calling her to drive the enemies of France from the land. Going to the king, whose army has been defeated, she asked for a small army. The king, believing that God had sent her to save France, gave her a band of brave soldiers.

Joan had a great love for Jesus whom she often received in Holy Communion. Joan also had a great devotion to the Angels especially St. Michael.

She went ahead of the soldiers carrying her special banner with the words “Jesus Mary”. The soldiers became filled with courage and drove the British army into retreating.

Later, and Joan fell into the hands of the British and remained in chains for nine whole months. She was then taken to the market place of Rouen and burned to death. Very sad. Joan fixed her eyes on a crucifix and cried out, “Jesus, Jesus” and through the flames. She, a youth like Cyril, also died a heroic death to honour our Lord and for that we in turn honour her.

May her pure sacrificial blood, encourage all youth to stand for what is right in the sight of God.

St. Joan, pray for us. Happy feast day to all Joan.

Share this
TAGSaint of the day St. Joan of Arc
Previous PostHearing ‘cry of the poor’ is key message of 'Laudato si' - Cardinal Turkson Next PostOpinion: Adelaide speaks on Vanity