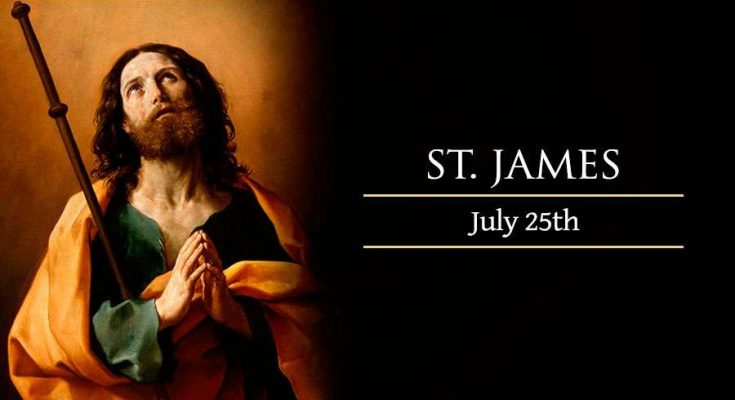 Saint of the day: St. James the greater, Apostle & Martyr, Patron of Spain

St. James the Greater was one of the disciples of Jesus Christ. He is thought to be the cousin of Jesus himself, by the sister of the Virgin Mary, and the brother of St. Jude Thaddeus.

He worked as a fisherman with his brother John, his father Zebedee and his partner Simon. James and John were followers of John the Baptist before St John the Baptist pointed out Jesus as the Lamb.

James, along with his brother John, left his life as a fisherman when Jesus called him to be a “fisher of men”. He followed Jesus as one of his disciples until Jesus was crucified by the Romans.

Following the crucifixion of Jesus Christ, he made a pilgrimage to the Iberian Peninsula to spread the word of Jesus and when he returned to Judea, he was beheaded by King Herod Agrippa I in the year 44AD, (Acts:12).

Herod Agripa I killed James the brother of John with the sword. Seeing that it pleased the Jews, he proceeded further to arrest Peter also. (Act 12).

According to legend, his body, along with his followers, sailed to the Iberian Peninsula on a rudderless ship with no sail. Landing on the northwest coast of the peninsula, they proceeded up the River Ulla to land at Iria Flavia, known today as Padron.

The Celtic Queen Lupia was the Queen of these lands, and when asked by James’ followers if they could bury his body there, she refused and rather sent troops after them.

While chasing the followers of James with his body across a bridge, it collapsed, killing all her troops.

Queen Lupia then converted to Christianity and provided an ox and cart for the followers of James to transport the body. Unsure of where they should bury the sacred remains, his followers prayed and decided to let the ox continue until it chose a place to rest.

After pausing at a stream the ox finally came to rest under an oak tree at the top of a hill and this is where the Cathedral of Santiago stands today.

St. James in Spanish form, St lago, is also the great military patron of Spain. His mission to defend the Christian Church against invaders was however reserved until after his death. He is attributed with helping Spain defeat the Moors.

During the celebrated battle of Clavijo, he suddenly appeared on a milk-white charger, waving aloft a white standard, and leading the Christians to victory.

This manifestation was in response to the soldiers’ invocation of his name, “Sant lago!” as the battle-cry of that day. Hence, the name of the ancient city SANTIAGO is where the cathedral was founded in his honour.

St. James the Greater died in the year 44 AD when he was beheaded by Herod, making him a martyr. St. James is also widely recognised as the first apostle to be martyred.

St. James the Greater is universally regarded as the patron of pilgrims because, after establishing the Christian religion in the Iberian Peninsula, modern Galicia, he returned to Judaea on a pilgrimage and was beheaded.

The scallop shell is the recognised symbol of all pilgrims on the Camino, as it’s found on the shores of Galicia. When returning to their own countries, pilgrims displayed the scallop shell in their hats to show that they had carried out their pious intentions.

Hurray to a great hero. Happy feast day to all James. St. James, pray for us to also make our pilgrimage in this life. Amen

Share this
TAGSaint of the day Spain St. James
Previous Post"It's important to add value to yourself" - Fr. Sakpaku to students Next PostSt. Francis Solano, Confessor