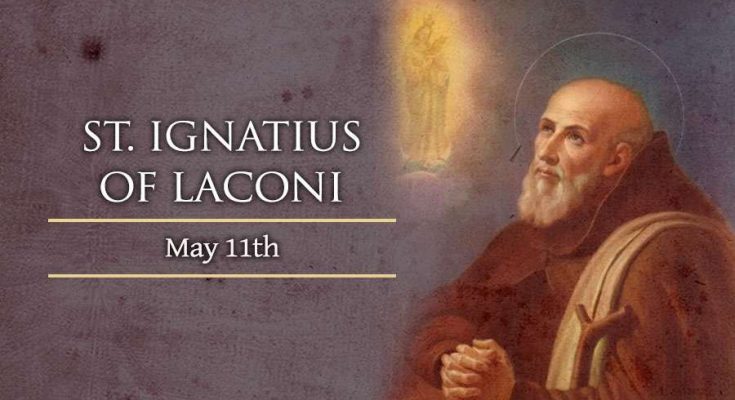 Saint of the day: St. Ignatius Laconi, Patron of Beggars and Students

St. Ignatius Laconi was originally born Vincenzo Peis on 10 December 1701 in Sardinia as one of seven children to the poor peasants Mattia Peis Cadello and Anna Maria Sanna Casu. He was baptized as Francesco Ignazio Vincenzo since he was born out of a difficult pregnancy in which her mother invoked the intercession of Francis of Assisi.

He worked on the fields to support his parents. He suffered a serious illness in 1719 aged seventeen that made him vow that he would consecrate himself to God and join the Order of Friars Minor Capuchin if God cured him from it. He did so recover but put off the fulfilment of his vow after his father convinced him to wait. His father was anxious about it because he depended on Peis for support in the fields. But there seems to be some indication that his parents objected to his entering the order.

In 1721 he was in danger once more when the horse he was riding panicked. He could have been thrown off but he called upon the assistance of Francis of Assisi and renewed the vow he had made during his illness. This time, his parents did not object to his becoming a friar and granted him their blessing. In his childhood he often called the local church his “home” and took St Lawrence of Brindisi as his personal role model.

He asked for admission at the convent in Cagliari but the superiors there hesitated because of his delicate health. He then called upon an influential friend who interceded for him and he was allowed to be received into the novitiate on 10 November 1721. Peis made his profession on November 10, 1722. Despite his infirmities, his Order allowed him to attend the spiritual exercises of the Order of and to excel in perfection of his observance of the Order’s Rule.

Peis spent his time in a number of different occupations and was later appointed as the quester of alms due to his humble and modest conduct. He had good relations with the people in Cagliari who realized that although he was begging alms he was also giving back to them in a spiritual manner. His modest demeanor was seen as a quiet sermon for all who saw him going about, which made him a noted figure. He seldom spoke, when required, he spoke with exceptional kindness and great affection. He also instructed children and the uneducated that he came across, and went out to comfort the sick and urge sinners to be converted and to perform penance.

There is a legend for which he was known for. He was strict and had total obedience to his superiors even when it required the denial of his own will. He was afraid of going to the house of an usurer because he feared that in accepting alms from him, he would share the guilt of this man’s injustices. But when the man complained and the superior commanded him, he accepted alms from the man. It was when he returned to home and opened the sack that the usurer offered and blood started to flow out. To those around him, Peis said: “This is the blood of the poor squeezed from them by usury”.

Peis’ sister had often written to him asking him to visit her so that she could get his advice in certain matters. Peis had no mind to heed her request but when his superior ordered him to do so he at once undertook the visit. But he left again as soon as he had given the required advice. Peis’ brother was sent to prison. They had hoped that in view of Peis’ reputation the latter could obtain his brother’s release. His superior sent him to speak to the governor but he asked that his brother be dealt with according to justice.

Despite his poor health and other infirmities, he continued in his work no matter how arduous it seemed. Even after he became blind in 1779, he continued to work on for the benefit of those around him. Peis died on 11 May 1781 at 3:00pm in Cagliari, where his remains were interred.

The cause for his canonization opened in 1844, 65 years after his death and there were numerous reports of miracles attributed to him occurring at his tomb.

The Positio dossier compiled during the cause noted that there were 121 miracles attributed to Peis during his life with an additional 86 reported after his death.

Share this
TAGSaint of the day St. Ignatius
Previous PostSaint of the day: Sts. Nereus, Achilleus and Pancras (Martyrs) Next PostOpinion: How to Fight Covid -19 with Indigenous Language [Pt 2]

One thought on “Saint of the day: St. Ignatius Laconi, Patron of Beggars and Students”