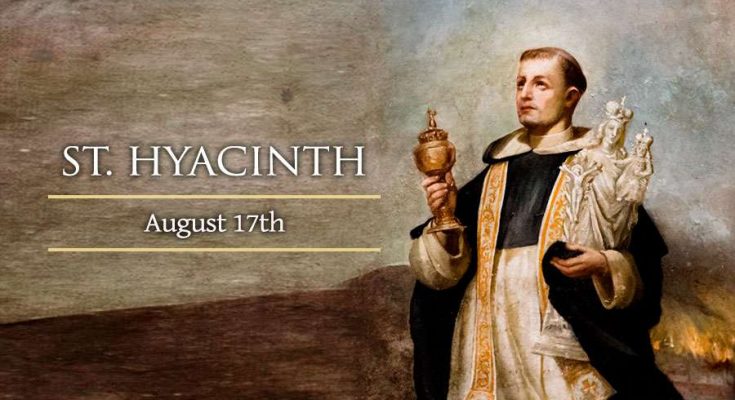 St. Hyacinth was a native of Silesia, which belonged to Poland. He studied at Cracow, Prague and Bologna, receiving the degrees of Doctor of Law and Divinity. On his return home, the Bishop of Cracow gave him a stipend in the Cathedral and employed his assistance in the admission of the diocese.

After the resignation of the pious Bishop Vincent, Yvo, uncle of St Hyacinth was appointed to fill the See. Going to Rome, he took with him his two nephews, Hyacinth and Ceslas.

It was in the year 1218 and St. Dominic was then in Rome. Hyacinth being greatly impressed, joined his institute, together with Ceslas and two German gentlemen, receiving the habit from St. Dominic himself in the convent of Santa Sabina.

They made their vows by special dispensation after a novitiate of only six months and returned to Poland. St. Hyacinth was appointed superior of their mission.

His preaching affected an entire change of morals in the city of Cracow. He carried the Gospel to the idolatrous countries of the North, that is Prussia, Pomerania, along the Baltic, in Denmark, Sweden and Norway.

He laboured in Russia too, traveling as far as the Black Sea and the Aegean, and returned to Cracow in 1231, but after two years he set out again to visit the convents he had founded and penetrated among the Tartars, going even to China and Tibet.

He again arrived to Cracow in 1257, the seventy-second year of his life. He died on August 15th,same year.

Historians call him Apostle of the North and the Thaumaturgus of his age, on account of his numerous miracles. He was canonised in 1594 by Pope Clement VIII.

St. Hyacinth, pray for us. Amen. Happy feast day to all Hyacinth and Poles.