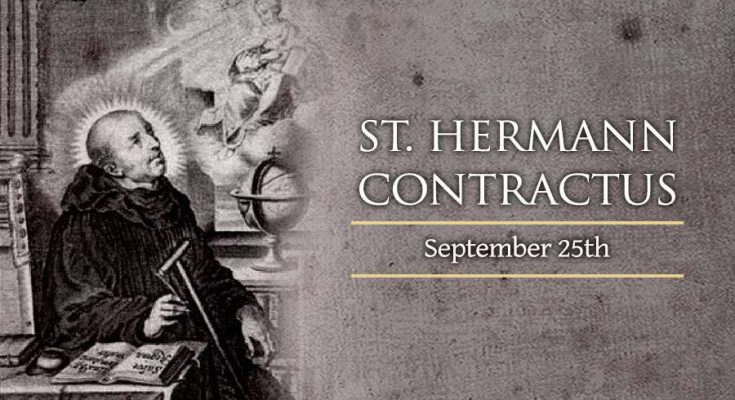 Born February 18, 1013, at Altshausen (Swabia), St. Hermann Contractus was born crippled and unable to move without assistance.  It was an immense difficulty for him to learn to read and write, however, he persisted and his iron will and remarkable intelligence were soon manifested.

Upon discovering the brilliance of his son’s mind, his father, Count Wolverad II, sent him at the age of seven to live with the Benedictine monks on the island of Reichenau in Southern Germany.

He lived his entire life on the island, taking his monastic vows in 1043.

Students from all over Europe flocked to the monastery on the island to learn from him, yet he was equally as famous for his monastic virtues and sanctity.

Hermann chronicled the first thousand years of Christianity, was a mathematician, an astronomer, and a poet, and was also the composer of the Salve Regina and Alma Redemptoris Mater – both hymns to the Virgin Mary.