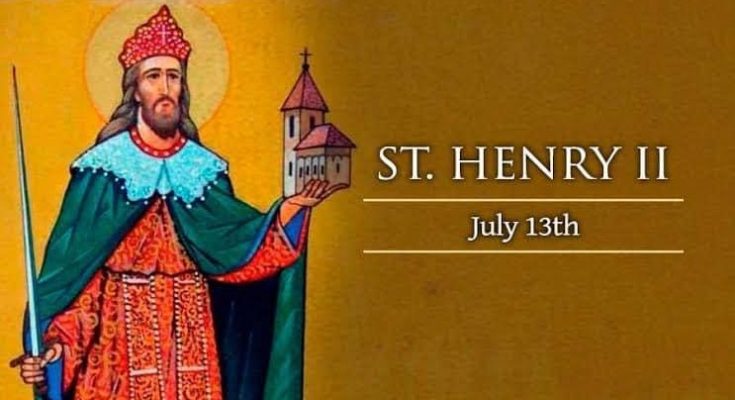 Saint of the day: St. Henry II, patron of the disadvantaged

St Henry was the son of Henry, Duke of Bavaria and Gisella, daughter of Conrad, King of Burgundy. He was born in 972. He was educated under the care of St Wolfgang,Bishop of Ratisbon. In 995, St Henry succeeded his father as Duke of Bavaria. In 1002, upon the death of his cousin, Otho III, he was elected as Emperor.

Firmly anchored upon the great eternal truths, he was not elated by the dignity of his new status but rather continued to sought in the things greater to the glory of God. He was watchful over the welfare of the Church.

He gained several victories over his enemies, both at home and abroad, but he used these with great moderation and clemency.
In 1014, he went to Rome and received the imperial crown at the hands of Pope Benedict VIII.

The humility and spirit of justice of the saint was equal to his zeal for religion. Both he and his wife lived in perpetual chastity, to which they had bound themselves by vow. He was very generous to all. He built the cathedral of Bamberg and built numerous pious institutions.
He died in 1024 at the castle of Grone, near Halberstad. He was canonised in 1146 by Pope Eugene III.

Simplicity, truth and humility makes a soul great. May St Henry II, help us in our quest to be better Christians, better soul winners and good examples to propagate the Good News. Amen

St Henry II, pray for us. Happy feast day to all Henry.