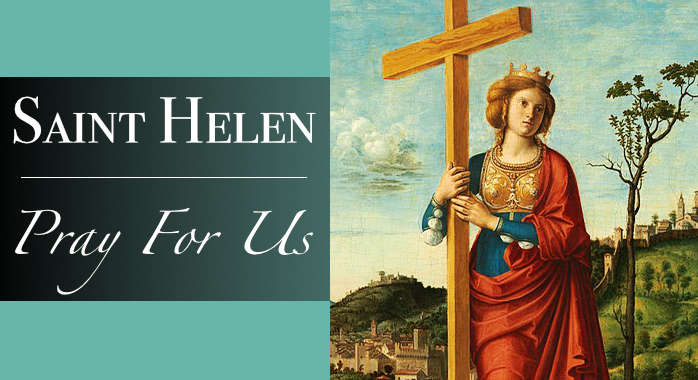 Helena was born around the year 246 to 248 AD. She was a native Greek of Drepanum in the province of Bithynia in Asia Minor. Her son Constantine renamed the city “Helenopolis” after her death around the year 330 AD, which supports the belief that the city was indeed her birthplace.

Very little is known of her early life. St Ambrose of Milan, wrote in the late 4th century was the first to call her a stabularia, a term translated as “stable-maid” or “inn-keeper”. He makes this fact a virtue, calling Helena a bona stabularia, a “good stable-maid”.

Constantine appointed his mother Helena as Augusta Imperatrix, and gave her unlimited access to the imperial treasury in order to locate the relics of the Christian tradition. In 326 to 328 AD, Helena undertook a trip to Palestine.

According to Eusebius of Caesarea who records the details of her pilgrimage to Palestine and other eastern provinces said she was responsible for the construction or beautification of two churches, the Church of the Nativity, Bethlehem, and the Church of Eleona on the Mount of Olives, sites of Christ’s birth and Ascension, respectively.

The chapel at Saint Catherine’s Monastery often referred to as the Chapel of Saint Helen is dated to the year 330 AD.

Jerusalem was still being rebuilt after the destruction caused by Emperor Titus in 70 AD. Emperor Hadrian had built during the 130s AD a temple to Venus over the supposed site of Jesus’s tomb near Calvary, and renamed the city Aelia Capitolina.

According to Eusebius, “there was a temple of Venus on the spot. This, queen Helena had destroyed.”

Helena ordered the temple torn down and at the end of the 4th century, chose a site to begin excavating, which led to the recovery of three different crosses.

Rufinus relates that the empress refused to be swayed by anything short of solid proof and performed a test. Through Bishop Macarius of Jerusalem, she had a woman who was near death brought from the city.

When the woman touched the first and second crosses, her condition did not change, but when she touched the third and final cross she suddenly recovered and Helena declared the cross with which the woman had been touched to be the True Cross.

On the site of discovery, Constantine ordered the building of the Church of the Holy Sepulchre. Churches were also built on other sites detected by Helena. It is however claimed that Helena also found the nails of the crucifixion.

To use their miraculous power to aid her son, Helena allegedly had one placed in Constantine’s helmet, and another in the bridle of his horse. According to one tradition, Helena acquired the Holy Tunic on her trip to Jerusalem and sent it to Trier.

Several relics purportedly discovered by Helena are now in Cyprus, where she spent some time. Among them are items believed to be part of Jesus Christ’s tunic, pieces of the holy cross, and pieces of the rope with which Jesus was tied on the Cross.

The rope, considered to be the only relic of its kind, has been held at the Stavrovouni Monastery, which was also said to have been founded by Helena. According to tradition, Helena is responsible for the large population of cats in Cyprus.

Local tradition holds that she imported hundreds of cats from Egypt or Palestine in the fourth century to rid a monastery of snakes. The monastery is today known as St. Nicholas of the Cats and is located near Limassol.

Helena left Jerusalem and the eastern provinces in the year 327 AD to return to Rome, bringing with her large parts of the True Cross and other relics, which were then stored in her palace’s private chapel, where they can be still seen today.

Her palace was later converted into the Basilica of the Holy Cross in Jerusalem. This has been maintained by Cistercian monks in the monastery which has been attached to the church for centuries.

Helena died around the year 330 AD, with her son at her side. She was buried in the Mausoleum of Helena, outside Rome on the Via Labicana. Her sarcophagus is on display in the Pio-Clementine Vatican Museum. Next to her is the sarcophagus of her granddaughter Constantina or Saint Constance.

St. Helen, pray for us. Happy feast day to all Helen, Ellen and Helena