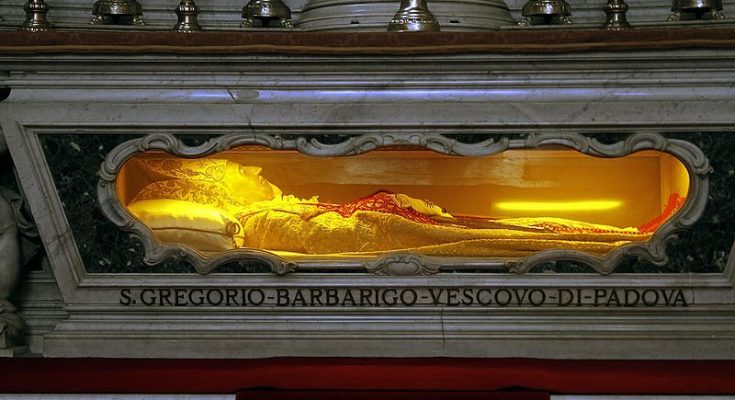 Gregorio Giovanni Gaspare Barbarigo was born on 16th September 1625 in Venice. He was the eldest of four children to his noble parents Giovanni Francesco Barbarigo a senator and Luziendo. His father brought a cousin, Franchesina Lippomani to look after them when their mother died.

He had a sister, Elena, and two brothers Pietro and Antonio. He was a relative of the cardinal Marcantonio Barbarigo and the uncle of Cardinal Giovanni Francesco Barbarigo. His father instructed him in philosophical studies and in mathematics while other tutors taught him Latin and Greek. He also received tuition in music.

In 1643, he accompanied the Venetian ambassador Aloise Contarini as secretary to Münster for the negotiations to prepare for the Peace of Westphalia which was signed on 24 October 1648. There, he became acquainted with Archbishop Fabio Chigi, the future Pope Alexander VII who was the Nuncio to Cologne and a participant in the negotiations.

He then went to Holland and Flanders and then to Paris. In July 1648, he returned to Venice and continued his studies in Padua. Then in 1650, he was elected as a member of the Collegio dei Savi and initiated his political career which he did not find to be good for him.

In the winter of 1653, he went to Rome to ask the advice of Cardinal Chigi who recommended that he should not retire as a hermit but follow the ecclesiastical career and obtain a doctorate in law.

He obtained the doctorate in both canon law and civil law on 25 September 1655 and received his ordination to the priesthood on 21st December, 1655 from the Cardinal Patriarch of Venice Gianfrancesco Morosini. He left for Rome in late February 1656 for Chigi who had become Pope Alexander VII.

On 9th July 1657, the Pope appointed him as Bishop of Bergamo and he received his episcopal consecration as such on 29 July 1657 from Marcantonio Bragadin. In 1664, he was made Bishop of Padua and upon entering into his new diocese strove to model himself upon the example of St. Charles Borromeo. He was a strong supporter of the work of the Council of Trent.

He made the seminaries of Padua and Bergamo larger and added an archive and printing press in Padua. He celebrated a diocesan synod from 1st–3rd September 1683 and wrote the “Regulae Studiorum” in 1690 for ecclesial studies. He also visited all 320 parishes in his diocese. Wow!

In his role as a Cardinal, he participated in his first Papal conclave in 1667 and also attended those in 1676 and that of 1689 when he emerged as a potential contender though falling short of the votes needed to become Pope. The same was said for 1691 which saw him emerge as a greater threat to other contenders. He did not attend the 1669-70 conclave.

The election of Pope Innocent XI in 1676 saw the Pope ask Barbarigo to remain in Rome until 1679 as his counselor and entrusted Rome’s education to him and the reunification of the Eastern Churches. One of his episcopal acts was to consecrate Bishop Niels Stensen on 19 September 1677 and also ordain the convert, Thomas Nicholson, as a priest in Padua.

Cardinal Barbarigo fostered catechetical instruction and traveled to each village in his diocese in order to teach and to preach to the people. His compassion for the poor was well known, for he gave his household goods and his clothes to the poor for their comfort. He even sold his bed on one occasion to help them. This is a real Father to the people.

Barbarigo died after a brief illness on 18th June 1697 in Padua where he was interred in the diocesan cathedral. A Father, a priest, and a friend.

St. Gregory, pray for us. Amen. Happy feast day to all Gregory.

One thought on “Saint of the day: St. Gregory Barbargio, Cardinal”