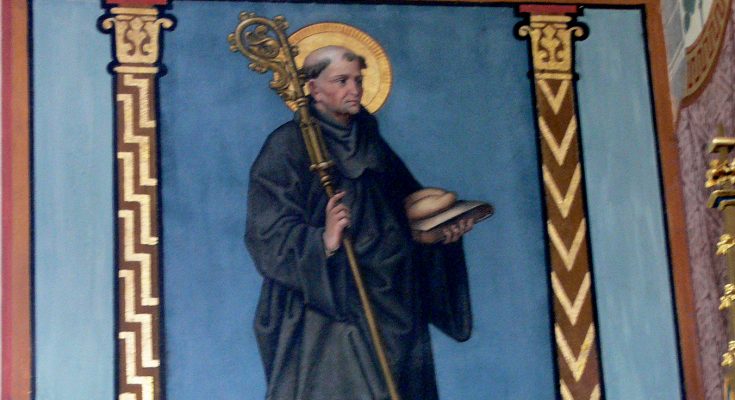 According to St. Gall’s 9th-century biographers in Reichenau, he was from Ireland and entered Europe as a companion of St Columbanus. Gallus as a young man went to study under Comgall of Bangor Abbey. The monastery at Bangor had become renowned throughout Europe as a great centre of Christian learning and studying in Bangor at the same time as Gall was Columbanus.

Gall and his twelve companions established themselves with Columbanus at first at Luxeuil in Gaul. In the year 610 AD, St. Columbanus was exiled by leaders opposed to Christianity and fled with St. Gall to Alemannia. He accompanied Columbanus on his voyage up the Rhine River to Bregenz but when in 612 Columbanus travelled on to Italy from Bregenz, Gall had to remain behind due to illness and was nursed at Arbon.

He remained in Alemannia, where, with several companions, he led the life of a hermit in the forests southwest of Lake Constance, near the source of the river Steinach. Cells were soon added for twelve monks whom Gall carefully instructed. He was soon known in Switzerland as a powerful preacher.

When the See of Constance became vacant, the clergy who assembled to elect a new Bishop was unanimously in favour of Gall. He, however, refused, pleading that the election of a stranger would be contrary to Church law. Sometime later, in the year 625 AD, on the death of Eustasius, Abbot of Luxeuil, a monastery founded by Saint Columbanus, members of that community were sent by the monks to request St Gall to undertake the government of the monastery. He refused to quit his life of solitude, and undertake any office of rank which might involve him in the cares of the world. He was then an old man.

There is a famous story the 9th century about St Gall. It is said St Gall delivered Fridiburga from a demon by which she was possessed. Fridiburga was the betrothed of Sigebert II, King of the Franks, who had granted an estate at Arbon to Gall so that he might found a monastery there.

Another popular story has it that as St Gall was travelling in the woods of what is now Switzerland he was sitting one evening warming his hands at a fire. A bear emerged from the woods and charged. The holy man rebuked the bear, so awed by his presence it stopped its attack and slunk off to the trees. There it gathered firewood before returning to share the heat of the fire with St Gall. The legend says that for the rest of his days St Gall was followed around by his companion the bear. This is why he is pictured with a bear.

St. Gall died at the age of ninety-five around the year 650 AD in Arbon.

St Gall, pray for us. Happy feast day to all Gall.

Share this
TAGHermit Saint of the day St. Gall
Previous PostBrother of Pope emeritus Benedict XVI dies in Regensburg Next PostSaint of the day: The first Martyrs of the church of Rome