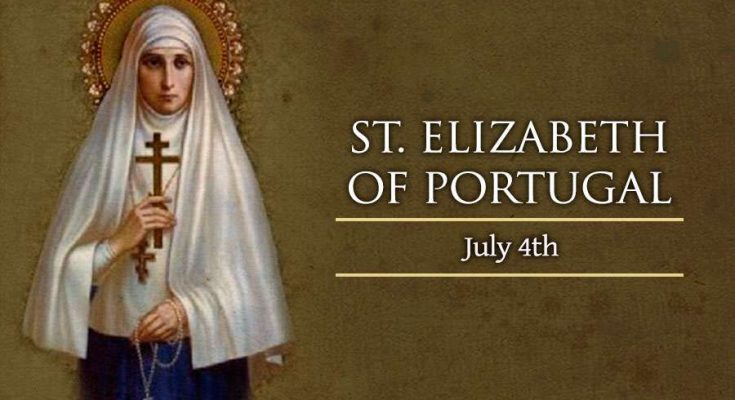 Saint of the Day: St. Elizabeth of Portugal, Patron of Hospitals

Elizabeth was born a princess in 1271 into the royal house of Aragon in Hungary. She was the daughter of King Peter III and his wife Constance of Sicily and the sister of three Kings, Alfonso II, James II of Aragon, and Frederick III of Sicily.

Elizabeth showed an early enthusiasm for her faith. She said the full Divine Office daily, fasted and did other penance, as well as attended twice daily and choral Masses.

Her marriage to King Denis of Portugal was arranged in 1281 when she was only thirteen years old, receiving the towns of Óbidos, Abrantes, and Porto de Mós as part of her dowry.

Elizabeth quietly pursued the regular religious practices of her youth and was devoted to the poor and sick. Such a life was taken as a reproach to many around her. Eventually, her prayer and patience succeeded in converting her husband, who had been leading a sinful life.

Elizabeth took an active interest in Portuguese politics and was a decisive conciliator during the negotiations concerning the Treaty of Alcañices, signed by Denis and Sancho IV of Castile in 1297, which fixed the borders between the two countries.

She had two children, a daughter named Constance, who married King Ferdinand IV of Castile, and a son Afonso, who later became King Afonso IV of Portugal.

She built a hospital at the foot of her castle. There, she fed the poor and the sick daily and attended to their needs. When her court ladies tried to stop her from helping the needy, she said “I am preparing for my judgment. I want to be able to say to Jesus: when You were hungry, I gave You to eat, when You had nothing on, I clothed You when You were sick, I visited You. Because You said in doing these for the poor, I do them for You, please be kind to me “.

Elizabeth was beatified in 1526 and canonized by Pope Urban VIII on 25 May 1625. Her feast day was inserted in the General Catholic Calendar for celebration on 4 July. In the year 1694, Pope Innocent XII moved her feast to 8 July, so it would not conflict with the celebration of the Octave of Saints Peter and Paul, Apostles.

In 1955, Pope Pius XII abolished this octave. Her feast is also kept on the Franciscan Calendar of Saints. Since the establishment in 1819 of the Diocese of San Cristóbal de La Laguna, Saint Elizabeth is the co-patron of the diocese and of its cathedral pursuant to the papal bull issued by Pope Pius VII. In the United States, her memorial has been transferred to 5 July since 4 July is the date of the independence of that nation, a national holiday.

Wanting to be able to tell Jesus that you visited Him when He was sick, clothed Him when He had nothing on, gave Him food when He was hungry, and actually living it, is amazing. May we also learn to please God through our neighbours and to do His will, Amen.

Happy feast day to all Elizabeth and all hospital workers. St. Elizabeth, pray for us. Amen