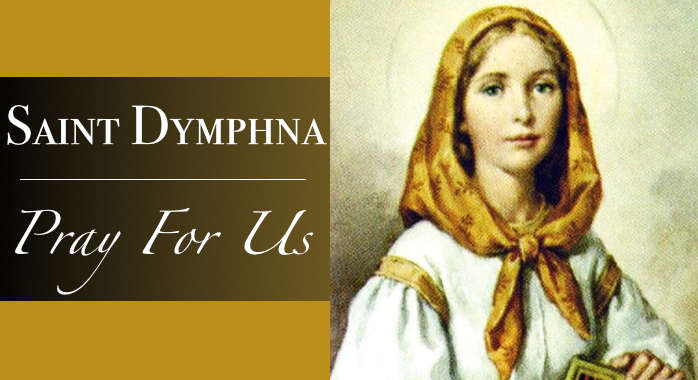 Saint of the day: St. Dymphna, Patroness of the Mentally Ill

St. Dymphna was born in the 7th century in Ireland. Her father, Damon, a chief of great wealth and power was a pagan. Her mother was a very beautiful and devout Christian.

Dymphna was just fourteen years when her mother died. Her father Damon was said to have been afflicted with a mental illness brought on by his grief of, loosing his dear wife. He sent messagers throughout his own and other lands to find a woman of noble birth and also resembling his late wife and will be willing to marry him. When no such woman could be found, his evil advisers who were probably tired of the search told him to marry his own daughter Dymphna.

The girl fled from her castle together with St. Gerebran her confessor and two other friends. Damon found them in Belgium and gave orders that the priest’s head be cut off. Damon then tried to persuade his daughter to return to Ireland with him. This little girl of very high moral, simply refused. Her father in a fit of anger, drew his sword and struck off her head. Dymphna was only fifteen years old.

Dymphna received the crown of martyrdom in defence of her purity just like St. Agnes and many young saints in the year 620.

She is the Patroness of those suffering from nervous and mental afflictions. Many miracles have taken place at her shrine built on the spot where she was buried in Gheel, Belgium.

Share this
TAGSaint of the day St. Dymphna
Previous PostSeven young girls benefit from a priest's creativity Next PostSaint of the day: St. Mathias, Apostle

One thought on “Saint of the day: St. Dymphna, Patroness of the Mentally Ill”