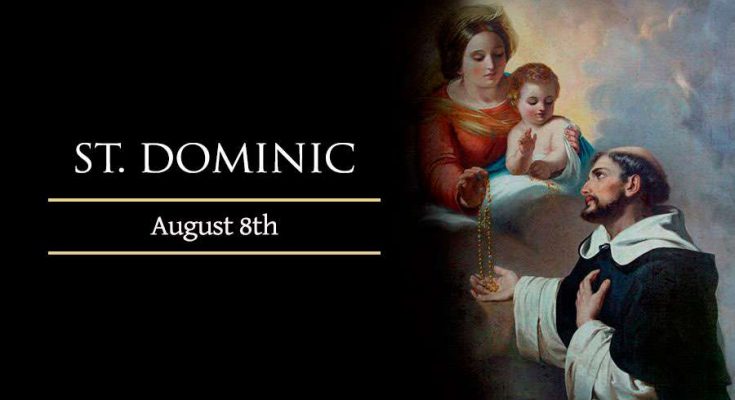 Saint of the day: St. Dominic, Patron of Astronomers

When his mother was pregnant with him, she had a dream. In the dream, she gave birth to a dog with a live touch in it mouth and the dog sprang forward going to all countries in the world. She didn’t understand the dream at the time.

Some years after his ordination, the Bishop took Dominic with him on a visit to southern France where a heresy, or Doctrine opposed to the teachings of the Church was being taught. Many people were leaving the Church to follow this false teaching. St. Dominic decided to remain in France and devote his life to preaching and leading people back to the Faith. The dog carrying a touch by him represents the fire of his zeal for souls and this was the dream his mother had during his pregnancy.

He went to Rome and told the Pope that he wanted to establish a religious order whose duty would be preaching and teaching. The new order was called the Order of Preachers, or the Dominicans.

Once when Dominic became discouraged with the slow progress of his work, he retreated into the woods to pray. He cried out to God, ” help me, help me”. Our Lady appeared to him with a beautiful wreath of roses and stretched it towards him. But when he touched the roses, it became a rosary. She asked him to say the rosary every day and to teach the people to pray the rosary and soon, the heresy began to disappear. The rosary is the greatest weapon that the devil fears and he knows it.

Before his death in 1221, Dominic also founded an order of nuns to care for young girls.

There is nothing as beautiful, fulfilling and rewarding as having conquered an ordeal with the help of God. St. Dominic, teach to pray the Rosary and be faithful dovotees to our Mother, Mary as you did.

St. Dominic, pray for us. Happy feast day to all Dominic and the Dominican Fraternity.

Share this
TAGSaint of the day St. Dominic
Previous PostCatholic Priest Calls On Youth To Embrace Agriculture As a Source Of Livelihood Next PostGCBC Condemns Recent Unrest In Some Senior High Schools