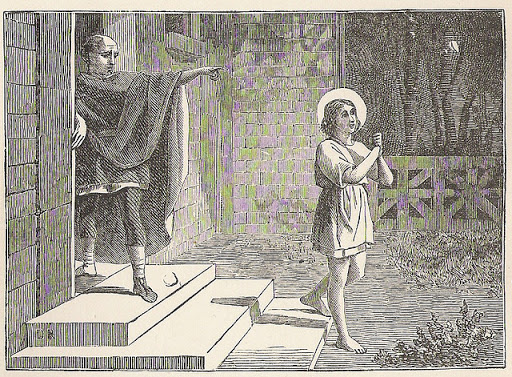 He used to repeat the name of Christ at all times, and confessed that the mere utterance of this name moved him strangely. He was beaten and reviled by his heathen father. But he bore all this with joy, increasing in the strength of Christ, Who dwelt within him, and drawing many of his own age to the imitation of his heavenly life. When his father in his fury turned him out of doors, he said he had lost little, and would receive a great recompense instead.

Soon after, he was brought before the magistrate on account of his faith. No threats could make him show any sign of fear, and the judge, pitying perhaps his tender years, offered him his freedom, assured him of his father’s forgiveness, and besought him to return to his home and inheritance. But the blessed youth replied, “I left my home gladly, for I have a greater and a better which is awaiting me.” He was filled with the same heavenly desires to the end.

He was taken to the fires as if for execution, and was then brought back and re-examined, but he only protested against the cruel delay. Led out to die, he hurried on the executioners, gazed unmoved at the flames which were kindled for him, and expired, hastening, as he said, to his home.

Young people they say are dear to the Heart of Christ. When any child shows signs of greatness, let help them especially when they wish to become religious. Most times, they are persecuted by the very ones who are to encourage them.

I say, whoever belongs to God, nothing can desuade him or her from her destiny. Have you not realised that when a youth wants to become religious and we try to stop them, they increase in their desire? Just like St Cyril, a youth abandoned and rejected by his father because of his faith, may all the youth employing their parents consent be courageous to respect their parents and at the same time remain in love with our Lord. For indeed, we are going to a BETER HOME. Amen.

St. Cyril, pray for us. Happy feast day to all Cyril.

Reference:Butler’s Lives of the Saints, 1894 Edition.