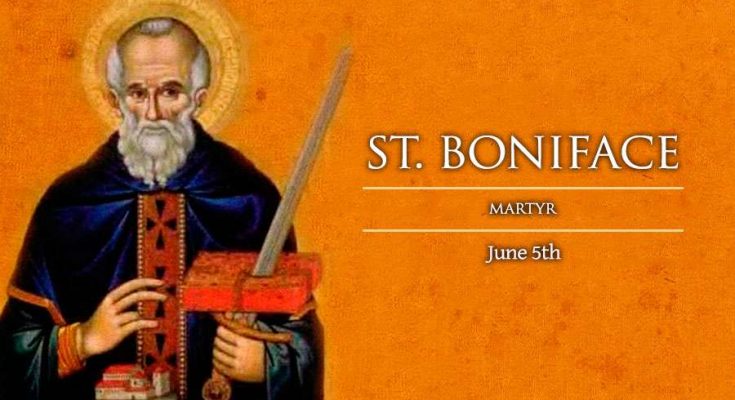 Boniface was born in 680 in Devonshire, England. From the age of thirteen, he was educated in the Benedictine monastery of Exeter, where he later became a monk.

He went on to Rome to obtain the Pope’s blessing on his mission to the German people. It was a slow and dangerous task. He destroyed the temples of idols and built churches on their site. Once, he cut down a huge oak tree which was dedicated to the god Jupiter and then used the tree in building a church this time, dedicated to St Peter.

Boniface was recalled to Rome, consecrated Bishop by the Pope, and returned to extend and organise the church in Germany. In 745, he chose Mainz as his Episcopal See, after he had established a number of dioceses. He corrected abuses and built religious houses.

Boniface set out to convert a pagan tribe in Holland. While he was waiting to administer Confirmation to some newly baptised Catholics, a troop of pagans arrived. His attendants would have opposed them but he said “My children, do not resist”. The pagans killed St Boniface and fifty-two Catholics who were with him on June 5, 755.

Sometimes, it is better to accept whatever comes our way. It may be our road to redemption or salvation. May we turn all our negative attitudes into positives to glorify God. Amen

Happy feast day to all Boniface. St. Boniface, pray for us. Amen

Share this
TAGSaint of the day St. Boniface
Previous PostSaint of the day: St. Norbert,  Patron invoked during Childbirth for safe Delivery Next PostMartyrs of Uganda memorial day marked without usual crowd and pilgrims