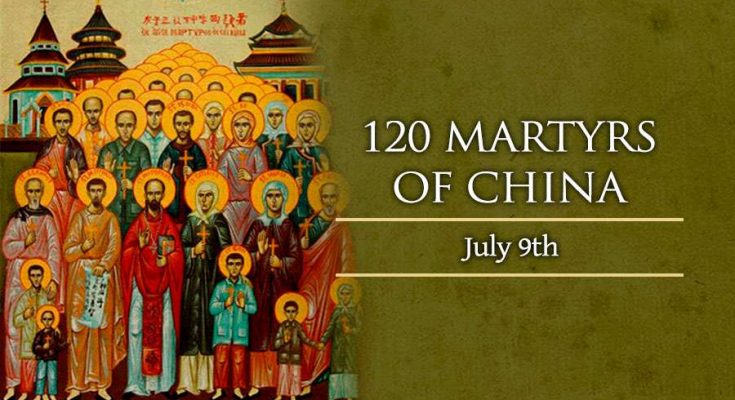 The early christians arrived in China through Syria in the 600s. Christianity in China over the centuries was free to grow or was forced to operate secretly depending on who was in power.

These 120 martyrs died between 1648 and 1930. Eighty-seven of them were born in China, and were children, parents, catechists, laborers, ranging from age nine to seventy-two years. They include four Chinese diocesan priests. The 33 foreign-born martyrs were mostly priests or women religious, especially from the Order of Preachers, the Paris Foreign Mission Society, the Friars Minor, Society of Jesus, Society of St. Francis de Sales (Salesians), and Franciscan Missionaries of Mary.

Augustine Zhao Rong was a Chinese soldier who accompanied Bishop John Gabriel Taurin Dufresse of the Paris Foreign Mission Society to his martyrdom in Beijing. Not long after his baptism, Augustine was ordained as a diocesan priest. He was martyred in 1815.

Though beatified at different times, these 120 martyrs were canonized together in Rome on October 1, 2000.

The People’s Republic of China and the Catholic Church each have well over a billion members, but there are only about 12 million Catholics in China. The reasons for that are better explained by historical conflicts than by utmost rejection of the Good News of Jesus Christ.

The Chinese-born martyrs honored today were regarded by their persecutors as dangerous because they were considered allies of enemy Catholic countries. The martyrs born outside China often tried to distance themselves from European political struggles relating to China, but their persecutors saw them too as westerners and therefore, anti-Chinese.

The word of God is meant for all and not “some”. Therefore, anyone persecuted or killed for believing in the Good News is the greatest sacrifice. May the humble sacrifice of these souls render the powers that hinder people from believing in God, useless. Amen

Happy feast day to all Augustine and Augustina.

Share this
TAGSaint of the day St. Augustine Zhao
Previous PostPresident of GCBC pays courtesy call on IGP Next PostSIGNIS Africa to host webinar for 70th anniversary of Radio Vatican broadcasts in Africa