Home Ghana News Saint of the day: St. Athanasius; Doctor of the Church 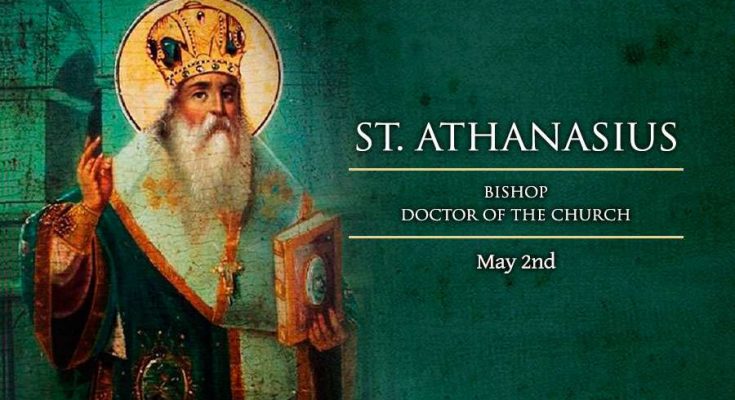 Saint of the day: St. Athanasius; Doctor of the Church

St. Athanasius, also known as Athanasius the Great and Athanasius the Confessor, was a bishop and doctor of the church. He is called the “Father of Orthodoxy,” the “Pillar of the Church” and “Champion of Christ’s Divinity.” Athanasius became one of the most dedicated opponents of the heresy of Arianism. Much of his life was a testimony to the divinity of Jesus Christ.

Born around 296 or 298 in Alexandria in Egypt to a prominent Christian family, Athanasius received a wonderful education in Christian doctrine, Greek Literature, Philosophy, Rhetoric, and Jurisprudence. He studied Hebrew Scriptures and the Gospel accounts and the Christian texts which later became recognized by the Church as the canon of the New Testament. He credited the confessors during the Christian persecution under the Roman Emperor Maximian as his teachers of theology.

Bishop Alexander of Alexandria became a strong influence in Athanasius’ life after Alexander witnessed him playing at administering Baptism as a young boy, with other children. Alexander called the boys over and after questioning them, he determined the baptisms were valid and decided to train them for the priesthood.

Athanasius became Alexander’s secretary in 318 after being ordained as a deacon. Around this time, Athanasius wrote his first work, a Theological Treatise on the Incarnation which is still quoted extensively in Christian theological studies and spiritual literature today.

Around 323, Arius, an ambitious priest of the Alexandrian Church, denied the Divinity of Christ, and began spreading the word that Jesus Christ was not truly divine, but merely created in time by the Eternal Father. Please remember that Arius was a priest.

Alexander demanded Arius produce a written statement on the false doctrine. It was condemned as heresy after two dissenting Bishops came forward. Arius and 11 other priests and deacons were deposed, or removed from their office, for teaching false doctrine.

Arius left for Caesarea but continued to teach his false doctrine and enlisted support from the Bishop of Nicomedia, Eusebius, and other Syrian prelates.

Athanasius, as Alexander’s secretary, was present during the great Church debate. He may have even composed the letter that announced Arius’ condemnation. Athanasius stood alongside Alexander during the famous Council of Nicaea to determine the matters of dogma.

It was during this meeting, summoned by Emperor Constantine, that Arius’ sentencing was officially confirmed and the Nicene Creed was adopted as the Creed of the Church and a worthy symbol of the orthodox Christian faith. So now we know how the Nicene Creed came about.

The early Christian Church, still undivided, rejoiced at the defense of the true nature of Jesus Christ. To this day, Athanasius is considered the great defender of the Faith in both the Orthodox and Catholic Churches.

Just five months later, Alexander died and Athanasius succeeded him after being unanimously elected. He was consecrated as the new Bishop of Alexandria in 328 and continued the fight against Arianism.

In 330, Eusebius approached Emperor Constantine and convinced him to command Athanasius to allow Arians back into communion. Athanasius refused, noting the Catholic Church could not hold communion with heretics who attacked the divinity of Christ.

However, Eusebius did not give up on his cause. He wrote to Athanasius trying to justify Arius and he wrote to the Egyptian Meletians in efforts to have Athanasius impeached.

The Meletians charged Athanasius with the crimes of exacting a tribute of linen for use in his church, sending gold to Philomenus, treason against the emperor, and authorizing one of his deputies to destroy a chalice being used at the altar by a Meletian priest. He was tried and proved his innocence on all accusations.

The Arians didn’t stop there though. They came forward with another charge, claiming he murdered a Meletian bishop. Athanasius was ordered to attend a council at Caesarea, but knowing the bishop was alive and in hiding, Athanasius ignored the summons.

In 335, Emperor Constantine commanded Athanasius to go to the Council of Tyre, Lebanon. The council was full of Athanasius’ opponents and was led by an Arian. Athanasius realized his condemnation was already pre-decided.

Athanasius was exiled for the first time to Trier, Germany. While there, he kept in touch with his flock by letter.

Athanasius’ exile lasted for two and a half years. He returned to Alexandria in 338 to find both Emperor Constantine and Arius had died. Constantine’s empire was divided between his three sons, Constantine II, Constantius, and Constans.

After he returned to Alexandria, his enemies continued to try to bring him to exile. They accused him of raising sedition, of promoting bloodshed and detaining his own use of corn.

Eusebius was able to obtain a second sentence of deposition against Athanasius and got the election of an Arian bishop for Alexandria approved.

After this, a letter was written to Pope St Julius asking for his intervention and a condemnation of Athanasius. The case for Athanasius was set forth, and the pope accepted the suggestion offered by Eusebius for a synod to discuss the situation.

Meanwhile, a Cappadocian named Gregory was installed in Alexandria, and Athanasius went to Rome to await his hearing.

Athanasius was completely vindicated by the synod but was unable to return home to Alexandria until the death of the Cappadocian Gregory in 345.

Athanasius returned to Alexandria to scenes of people rejoicing after he had been absent for eight years.

However, in 353 Athanasius would face more condemnations by the Arians in the councils at Arles, France, and again in 355 in Milan, Italy.

Persecution continued against Athanasius and escalated to physical attacks against him. While he was celebrating a vigil Liturgy in a church in Egypt, soldiers forced their way in and killed some of the congregation. Athanasius managed to escape and hid in the desert, where a group of monks kept him safe for six years.

During his years as a hermit, he wrote his Apology to Constantius, the Apology for His Flight, the Letter to the Monks, and the History of the Arians.

Athanasius returned to Alexandria after the death of Constantius in 361 and the new emperor, Julian, revoked all sentences of exile enacted by his predecessor.

This lasted only a few months though. Emperor Julian’s plan for paganizing the Christian world couldn’t get very far so long as Athanasius, the champion for the Catholic faith, was around. Therefore, Julian exiled Athanasius and he once again sought refuge in the desert.

He stayed there until 363 when Julian died and the next emperor, Emperor Jovian reinstalled him. Jovian’s reign was a short one, and Athanasius was again banished just eight months later. Jovian’s successor, Valens issued an order banning all Orthodox bishops who were exiled by Constantius.

Four months later, Valens revoked his own order and Athanasius was restored permanently. Over the course of his life, Athanasius was banished five times and spent 17 years of his life in exile for the defense of the doctrine of Christ’s divinity. However, the last years of his life were peaceful and he died on May 2, 373 in Alexandria. His body was transferred, first to Constantinople, then to Venice.

Wow! See how one person suffered just to prove the Divinity of Christ. And more so, to be accused by one’s own brethren. Hmm. Believing that whatever has to be, will be, we march on and let God lead the way.

Happy feast day to all Athanasius. St Athanasius, pray for us.

One thought on “Saint of the day: St. Athanasius; Doctor of the Church”