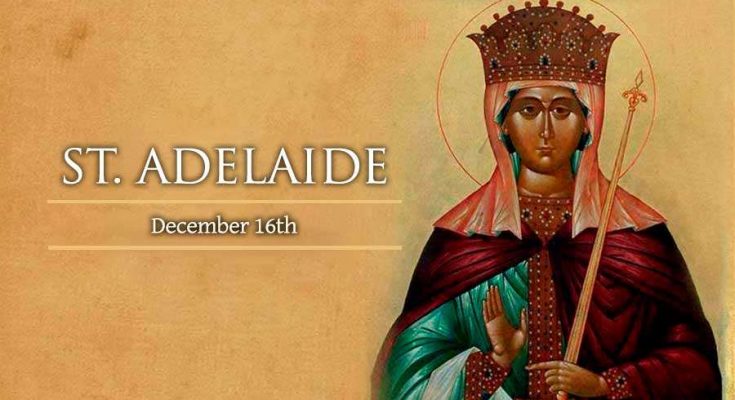 Saint of the day: St. Adelaide

Born in 931 in Burgundy, France as the daughter of King Rudolph II of Burgundy, Adelaide was promised in marriage when she was only two years old, to a man named Lothaire, the son and heir of his enemy, Hugh of Provence.

Lothaire was killed when still young, and Adelaide was to have a tumultuous life that paralleled the struggle for political power of the times, something she had come to symbolize. She appealed to Otho the Great of Germany for help.

Having been sought after by various kings and nobles after Lothaire’s death, she was finally married by Otho the Great of Germany, who had invaded Italy.

After Otto’s death on May 7, 973, Adelaide exercised influence over her son Otto II until their estrangement in 978, when she left the court and lived in Burgundy with her brother King Conrad. At Conrad’s urging, she became reconciled with her son, and, before his death in 983, Otto appointed her his regent in Italy.

With her daughter-in-law, Empress Theophano, she upheld the right of her three-year-old grandson, Otto III, to the German throne. She lived in Lombardy from 985 to 991, when she returned to Germany to serve as sole regent after Theophano’s death (991). In 991, Adelaide was invested as the Regent of the Empire, and she used her power as the effective empress to increase evangelization efforts, especially in northern Europe, and built many monasteries and churches, and also gave much aid the poor.

She governed until Otto III came of age in 994, and, when he became Holy Roman emperor in 996, she retired from court life, devoting herself to founding churches, monasteries, and convents.

She died in 999 at the monastery of Seltz, Alsace, and was canonized in 1097 by Pope Urban II.

Share this
TAGSaint of the day St Adelaide
Previous Post34 Tertiary Students benefit from Archbishop Andoh Fund Next PostAndy Manomey writes: My Advice Before Your Wedding