Home Ghana News The story behind Our Lady of Perpetual Help 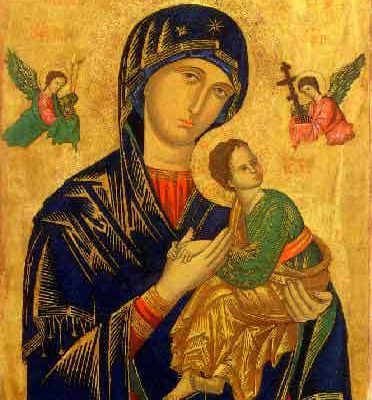 The story behind Our Lady of Perpetual Help

On 23 June 1867, Pope Pius IX granted the image its Canonical Coronation along with its present title. The Redemptorist Congregation of priests and Brothers are the only religious Order currently entrusted by the Holy See to protect and propagate a Marian religious work of art. In the Eastern Orthodox Church iconography, the image is known as the ”Virgin Theotokos of the Passion” due to the instruments of the Passion of Jesus Christ present on the image. Look at the picture carefully. Every picturesque object on the icon has a special meaning. It is believed that when the Angels showed the Baby Jesus the objects of his passion, which is what the two angels are carrying, the baby got frightened that one of his little shoes slipped off his baby feet. Even as a baby, he perfectly understood His passion of the Cross ➕.

The feast day of the image is celebrated on June 27, with novena devotions held every Wednesday. Under Pope Pius XII’s Pontificate, the image was designated as the national Patroness of the Republic of Haiti and Almoradi, Spain. Due to promotion by the Redemptorist Priests since 1865, the image has become very popular among Roman Catholics.

Legends says that the icon is a a true copy of a painting that was painted by Saint Luke himself using the meal table of the Holy Family in Nazareth.

The earliest written account of the image comes from a Latin and Italian plaque placed in the church of San Matteo in Via Merulana where it was first venerated by the public in 1499. The writer of the icon is unknown, but according to a parchment attached to the painting that accompanied the icon, it was stolen by a merchant sailing to Rome from the island of Crete. The Keras Kardiotissas Monastery is regarded as the monastery from which the icon was stolen. The image remained in the private possession of a Roman merchant and his family until 27th March, 1499, when the icon was transferred to the church of San Matteo and remained there for 300 years. The picture was then popularly called Madonna di San Matteo.

The Redemptorists, who are officially called The Congregation of the Most Holy Redeemer within the Roman Catholic Church, maintain a robust account of the icon and its passage from the private hands of a merchant family in Rome to its final and current location at the Church of St. Alphonsus De Liguori, on the Esquiline Hill in Rome.

The account includes the story of a merchant who secured the icon from Crete, and brought it to his family’s home in Rome, during the late 15th century. The story includes a passage of a young member of the family, a six-year-old daughter of the merchant, who was visited by the Virgin Mary in a dream. Part of the account includes the following passage: “At last, the Blessed Virgin appeared to the six-year-old daughter of this Roman family and told her to tell her mother and grandmother that the picture of Holy Mary of Perpetual Help should be placed in the Church of St. Matthew the Apostle, located between the basilicas of St. Mary Major and St. John Lateran in Rome”.

The icon remained at St. Matthew’s for three centuries. For at least the final 60 years of the 18th century, St. Matthew’s was occupied by an Irish Augustinian congregation of the Catholic Church. When war broke out in Rome in 1798, the icon was moved to the Church of St. Mary in Posterula, near the Umberto I bridge that crosses the Tiber River in Rome. The icon remained hidden there until Pope Pius IX granted the possession of the icon to the Redemptorists by Papal Edict, in 1865.

According to the account by the Redemptorists: “In January 1866, Frs Michael Marchi and Ernest Bresciani went to St. Mary’s in Posterula to receive the picture from the Augustinians.” The Redemptorists had purchased the property where the former St. Matthew’s had stood, and had established and built the current Church of St. Alphonsus De Liguori, in honor of the founder of their congregation. Thus, the venerated icon of the Catholic Church was returned to the location described by the Virgin Mary in the dream of the merchant’s daughter, that is, at the church between St. Mary Major and St. John Lateran.

Redemptorist tradition holds that Pope Pius IX declared, in 1866, that the Redemptorists make the icon known to the world, and so, several copies were made and sent to Redemptorist parishes around the world.

Novena to our Lady of Perpetual Help never fails. She grants every wish and the prayer itself is very beautiful to pray. Perpetual means forever. Our beloved Mother will forever help you. Amen